No bus runs in Khulna 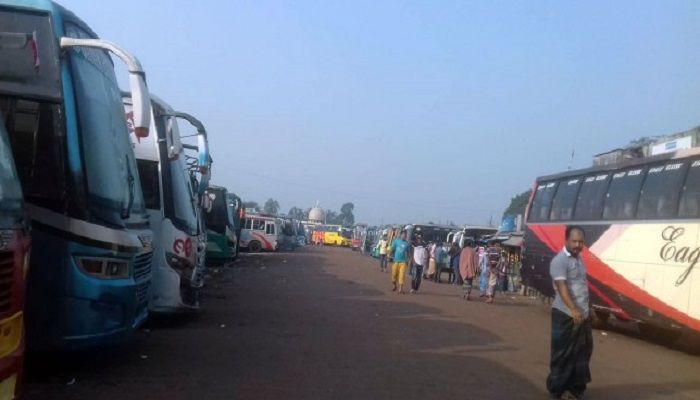 No buses were plying from Khulna to other districts owing to the work abstention being observed by a section of transport workers. Photo: Collected

﻿Commuters faced immense sufferings as no buses are leaving or entering Khulna for the fourth consecutive day following the strike called by transport owners and workers demanding amendments to the new Road Transport Act-2018.

Bus movement remains suspended on at least 18 routes from Khulna to other districts.

Meanwhile, transport workers in Dinajpur once again enforced a strike around 11:00am today snapping bus routes to five other districts.

Busses  were plying till the strike in the morning, said Golam Rabbi, general secretary, of the local transport owners and workers association.

''Our central leaders will sit in a meeting in Dhaka after 12noon and a decision will be then taken in this regard,''said Nurul Islam Baby, President of the Khulna Motor Workers’ Union.

Many locals thought the transport strike was called off after truckers withdrew their strike around 1:00am today

Owing to the confusion, hundreds of commuters showed up at Shonadanga bus terminal in Khulna only to find out no buses were leaving the terminal.

Currently, commuters using either easy bikes or other local modes of transport to travel to their destinations.

Transport owners and workers have enforced the indefinite strike, defying Road Transport and Bridges Minister Obaidul Quader’s call for them to refrain from such programs centering the new transport law.

After the law was enforced, the drivers feel unsafe as many of them have no valid documents.