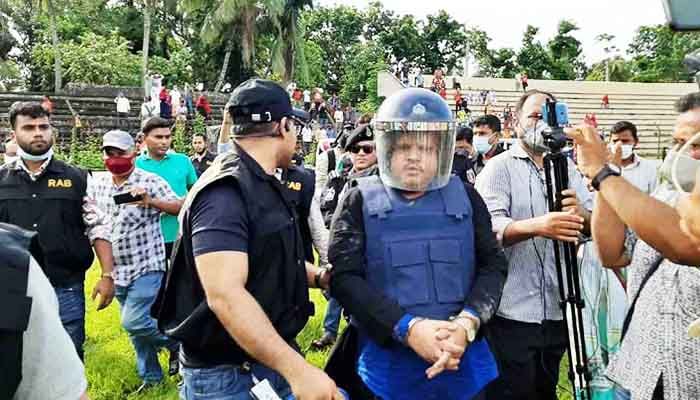 Regent Group Chairman Mohammad Shahed on Wednesday demanded justice after claiming himself innocent in an arms case filed against him.

A Dhaka tribunal read out the charges with him in the dock quoting statements of prosecution witnesses in the case.

The accused made the submission in self-defense rejecting statements furnished by 10 prosecution witnesses before the tribunal earlier.

The tribunal is scheduled to hear arguments in the case on Thursday.

On August 19, a tribunal in Dhaka took cognizance of charges against Mohammad Shahed and fixed August 27 for indictment hearing.

Shahed, who had a miracle growth, has a sudden fall for allegedly issuing fake corona negative certificates to a lot of people who later tested positive abroad tarnishing the image of the country.

Members of Rapid Action Battalion (RAB) arrested Shahed from a bordering area of Satkhira on July 15.

He was not only arrested but also implicated in several cases including, one for carrying arms. The arm case was filed with Uttara Pashchim Police Station.

The Regent Group head office along with both the hospitals was sealed off and 16 people, including the chairman, were sued on charge of issuing fake coronavirus test reports.