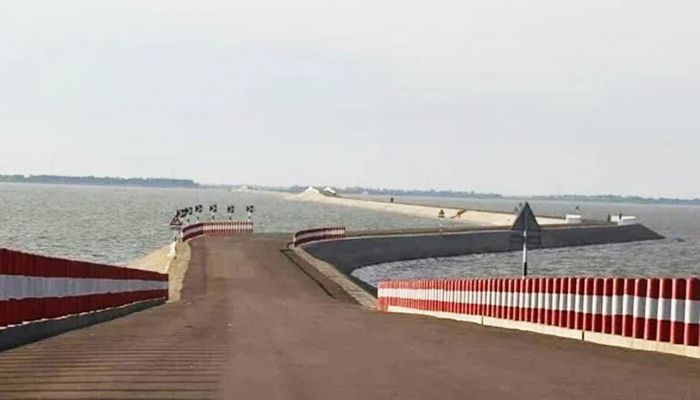 She inaugurated the 29.73–km beautiful road through a videoconference from her official residence Ganabhaban in the capital.

The road constructed at the cost of Tk 874.08 crore connects three Upazilas of Kishoreganj – Itna, Mithamoin and Austagram.

The Itna-Mithamoin-Austagram road goes straight through the midst of the vast haor area in parallel with Dhanu and Baulai rivers starting from Itna Upazila Sadar to Austagram via Mithamoin Upazila.

The road has already been turned as one of the most beautiful destinations for particularly travelers, holidaymakers and thrill-seekers before its formal inauguration.

A huge number of tourists flock regularly to the area to enjoy the scenic beauty of the road and its surrounding Haor areas.

Almost half of Kishoreganj district, including four of its six Upazilas - Itna, Mithamoin, Austagram, and Nikli-  is designated as a complete haor area, unique wetland ecosystems that during the monsoon resemble vast inland seas.

In 2016, President Abdul Hamid inaugurated the construction of the road in his ancestral district.

The road will also be connected to Sylhet-Brahmanbaria road in the future and a plan has been taken to build a flyover on it.

The road popularly known as the 'Haor Road' paved the way for direct road connectivity between the haor region and other parts of the country including Dhaka, Sylhet and Chattogram.

Later, the Prime Minister exchanged views with local people who were connected from Mithamoin Upazila. Local MPs and local dignitaries of the Kishoreganj district were present in the Mithamoin end.

While exchanging views with local people, the PM said the road is a gift on behalf of President Abdul Hamid in the Mujib Borsha (Mujib Year).

Secretary of Road Transport and Highway Division Md Nazrul Islam made an audio-visual presentation over the road project.