China Concerned at Delay in Repatriation of Rohingyas 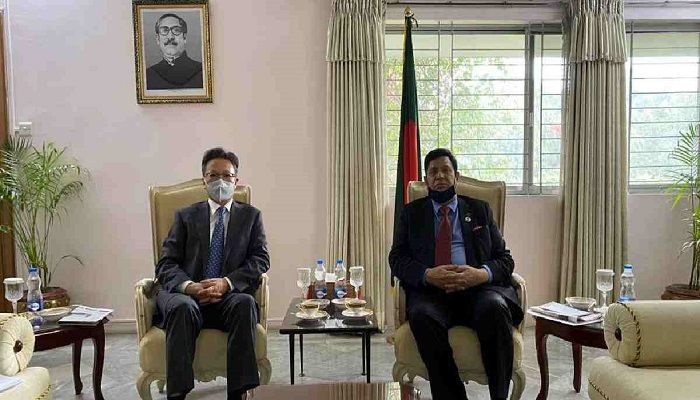 ﻿Chinese Ambassador to Bangladesh Li Jiming on Sunday expressed concern as the repatriation of Rohingyas to their place of origin in Rakhine State has not started yet.

He shared his concern during his meeting with Foreign Minister Dr AK Abdul Momen on Sunday in the city.

Dr Momen sought the Chinese government's support for the quick and sustainable return of Rohingyas to Myanmar.

Eight people, both from Rohingya and host communities, were killed in a series of clashes in Cox's Bazar Rohingya camps recently.

Dr Momen said the Rohingyas will appear as a threat to security in the region if their repatriation to Myanmar is delayed.

There are allegations that Rohingyas got engaged in drug smuggling.

Dr Momen said there is an increased number of incidents in the Rohingya camps amid the absence of barbed wire around the camps.

He said displeasure among locals is getting intensified on Rohingyas and international organisations due to delay in the repatriation process.

Dr Momen said humanitarian support and improvement of their livelihoods are not enough to resolve the problem.  "But it needs a permanent solution through Rohingyas repatriation to Myanmar," he said.

Chinese Ambassador Jiming agreed on it with the Foreign Minister, said the Ministry of Foreign Affairs.

The Foreign Minister recently said Rohingyas will "jeopardise regional and international security" if the 1.1 million Rohingya people are left unattended and not given the opportunity to return to their homeland.

Bangladesh sought a pro-active role from both ASEAN and Thailand on the repatriation of Rohingyas to their place of origin in Rakhine State.

Repatriation attempts failed twice in November 2018 and August 2019 amid Rohingyas' "lack of trust" on the Myanmar government.

On January 16, 2018, Bangladesh and Myanmar signed a document on “Physical Arrangement”, which was supposed to facilitate the return of Rohingyas to their homeland.

The Foreign Minister said those involved in the killing of a Chinese citizen will be brought to justice.

"The government is very active about it. Two persons, including the key accused, are already arrested," Dr Momen conveyed the Ambassador.

Earlier, the Chinese Embassy condemned the brutality saying "So saddened to learn that a Chinese national was stabbed to death by a mugger near the construction site of Bangladesh-China Friendship Bridge over Kocha river in Pirojpur's Sadar upazila this evening. We condemn the brutality."

The Foreign Minister requested the Chinese government to renew visas for the Bangladeshi students who study in China but got stuck here due to the Covid-19 pandemic.

The Chinese Ambassador assured of taking a decision in this regard soon by the Chinese government.

Ambassador Jiming said visas are being issued for family reunion and businesspeople.

He said the book written by Father of the Nation Bangabandhu Sheikh Mujibur Rahman titled "Amar Dekha Naya Chin (China)" is being translated into Chinese language. It will soon be published.