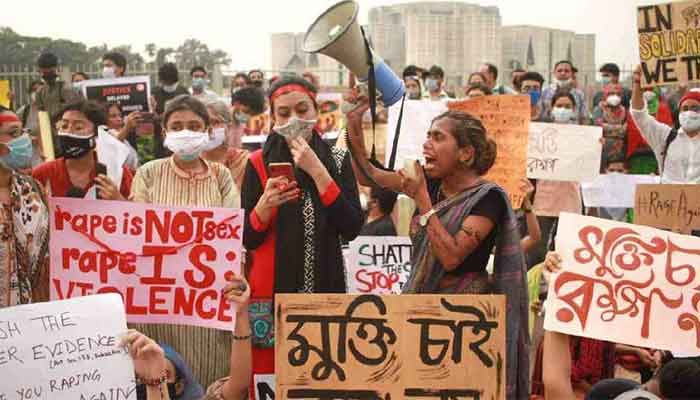 ﻿﻿The cases of rape, gang rape and molestation never seem to decrease across the country , despite widespread protests against rape and the government's proposal to toughen the law in this regard.

A female NGO worker was allegedly raped in Bagerhat by a gang at her Maitkumra house in Fakirhat, reports UNB.

In this respect, the victim filed a case on Sunday against four individuals — Mamun Sheikh, Firoz Nikari, 29, Raju, 25, and Musa, 29.

One of them is a three-wheeler driver, and three others are construction and agricultural workers, the police said.

Police seized a video of the incident which was recorded by the rapists to blackmail her, Pankaj said.

The culprits also looted Tk 16,000 and gold ornaments from the victim’s house.

Patrol police arrested one of them but three others managed to flee, the SP said.

“We’re on a manhunt to catch others,” he added.

Police arrested a youth in Rangpur early on Sunday after he allegedly raped a sixth grader in the Ghulai area of Badarganj.

The arrestee was identified as Haniful Haque's uncle, Rayhan Haque, 26.

Rayhan raped the girl when she was alone in the house on Saturday night, he said.

Later, the victim's father filed a case with Badarganj Police Station over the matter, he added.

The girl has been sent to Rangpur Medical College and Hospital for a medical test, the OC said.

Police arrested a young man in Sylhet after he allegedly raped a teenage girl for seven days after confining her in the village of Kanaighat upazila in Barchatul.

Sub-inspector Mainul Islam of the Kanaighat Police Station said that Mizanur had taken the 16-year-old victim to his home, promising to marry her on October 3, where he raped her several times after confining her for seven days.

Police conducted a drive at Mizanur’s house and rescued the victim, SI said.

Victim’s father filed a case with Kanaighat Police Station over the matter, he added.

The victim was sent to Sylhet Osmani Medical College Hospital for medical tests, he said.

According to Ain-o-Salish Kendra (ASK), a human rights organisation, some 1,000 rape cases were reported in the country, including 208 gang rapes, between January and September 2020.

Waves of anti-rape protests erupted across Bangladesh after video footage of five men gang-raping a housewife, stripping her nude, and recording the video of the incident in Noakhali's Begumganj Upazila, went viral on social media on Sunday.

The incident occurred at Joykrishnapur village under Eklashpur union of the upazila on September 2.

Protesters, including students, politicians and activists from various groups, have protested in Bangladesh over the last few days against the rising incidences of rape , sexual assault and violence against women.