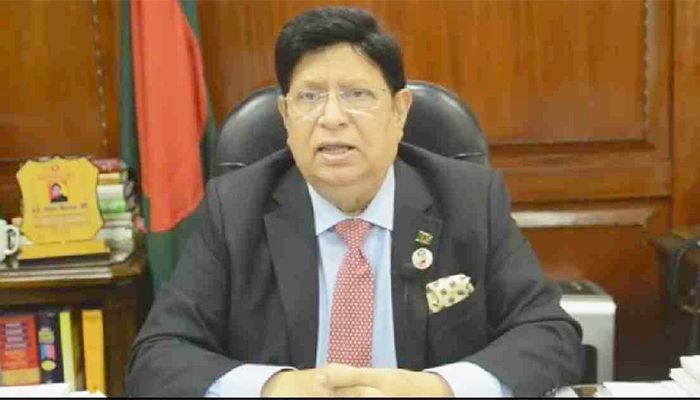 ﻿Foreign Minister Dr AK Abdul Momen on Wednesday said Myanmar's lack of sincerity is the key reason behind the delay in Rohingya repatriation and sought genuine pressure from the international community on Myanmar.

"Myanmar says they'll take back Rohingyas but they didn't take anybody despite giving two dates for their repatriation," he told reporters at an interaction event with Dhaka Reporters Unity (DRU).

The Foreign Minister said Myanmar does not feel any pressure and they do not respond to Bangladesh on the Rohingya repatriation issue. "If we knock them 100 times, they just reply twice."

He said Bangladesh was fully ready to send the Rohingyas back when Myanmar gave Bangladesh dates twice to do so. "They made a commitment to take back Rohingyas after verification but didn’t live up to it."

Dr Momen said Myanmar is doing business and making investments from various countries, including the European ones.

The Foreign Minister said Russia and China have encouraged all to solve the Rohingya issue bilaterally. "We remain engaged on all fronts -- bilateral, trilateral and multilateral -- to find a solution."

He said China willingly came to help Bangladesh but it does not mean that Myanmar will listen to China always.

Dr Momen said the international community is giving much focus on the improvement of Rohingyas' living conditions while Bangladesh's aim is to send them back as soon as possible. "So, there’s a gap."

The Foreign Minister said the government will relocate 100,000 Rohingyas to Bhasan Char but no date is fixed yet. "We’ll take them in small groups without making any big announcement."

He said international agencies and NGOs are creating barriers to Rohingyas relocation to Bhasan Char from Cox's Bazar camps.

On Tuesday, Dr Momen said Bangladesh will approach for resuming Rohingya repatriation talks after the full formation of a new government in Myanmar saying Bangladesh stands ready to send back Rohingyas.

The repatriation talks remain halted due to the COVID-19 pandemic and elections in Myanmar.

Bangladesh will also reactivate the tripartite mechanism -- Bangladesh-China-Myanmar -- so that Myanmar takes back their Rohingyas from Bangladesh, said the Foreign Minister adding that such three meetings are already held.

The Myanmar side gave commitment over the repatriation of Rohingyas in various ways but not a single Rohingya returned to Rakhine over the last three years.

There is a trust deficit among Rohingyas that needs to be addressed by the Myanmar side, Bangladesh said.

Apart from the commitment to take back their nationals, Myanmar also informed that they have published a booklet on the work the Myanmar side has done and Rohingyas will be given those booklets to know the situation in Rakhine.

The Foreign Minister recently said Rohingyas will "jeopardize regional and international security" if the 1.1 million Rohingya people are left unattended and not given the opportunity to return to their homeland.

Repatriation attempts were failed twice in November 2018 and August 2019 amid Rohingyas' "lack of trust" on the Myanmar government.

On January 16, 2018, Bangladesh and Myanmar signed a document on “Physical Arrangement”, which was supposed to facilitate the return of Rohingyas to their homeland.