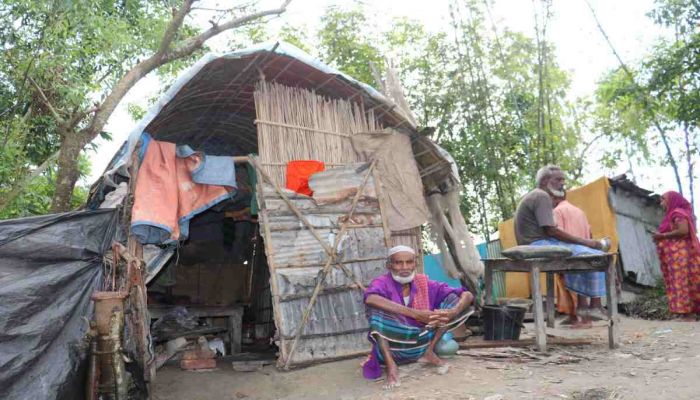 ﻿Mohila Begum saw the local river swallow it one night after years of peaceful life in a house she had built with her husband in the village of Sardob in Sadar Upazila.

The family now lives on the roadside in a makeshift plastic shed. I lost my house to the collapse of the river bank and now I have taken refuge on the roadside. I have no funds to restore my house or any employment to support my life says Mohila, reports UNB.

She isn't alone. About 8,000 families displaced over a period of time by riverbank erosion are now looking at an uncertain future as no concrete steps for their recovery are yet to be taken by the local authorities.

Riverbank erosion, particularly during the monsoon, is a common problem along Bangladesh's mighty rivers, including Brahmaputra, Dharla, Teesta, Dudhkumar and Shonabhari, eating up farmlands and homes across the country.

This year as floods wreaked havoc on the district for the fifth time, the residents of Kurigram were the hardest hit. Hundreds of people left homeless in the district say that the government did not get a single penny.

"Another resident of Sardob, Jahir Uddin, says, "I lost everything to the erosion of the riverbank, except the tin roof of my three homes. I put them in an open spot. I was forced to take out a loan of Tk 20,000 as well.

About 6,000 families in the district's six Upazilas have been made homeless due to prolonged flood conditions and river erosion, according to sources at the District Relief and Rehabilitation Office.

However a list of the affected families has been submitted to the relevant ministry, the sources said.

Of the 6,000, some 60 families have taken shelter at Sardob flood control embankment. Neither they have any work nor any money to cultivate crops on parts of their farmlands spared by the devastation.

Ali Hossain, who took shelter at Jagomohoner Char in Sadar upazila under the Bhogdanga union, says, "I've lost two houses." I really struggle to earn myself two square meals a day. So far the government has not offered us any support.

Abdul Hye Sarkar, district relief and rehabilitation officer, said when contacted, "A list was sent to the department concerned, seeking money and corrugated iron sheets for victims of river bank erosion." After receiving allocation from the ongoing recovery programme, assistance will also be provided to them.