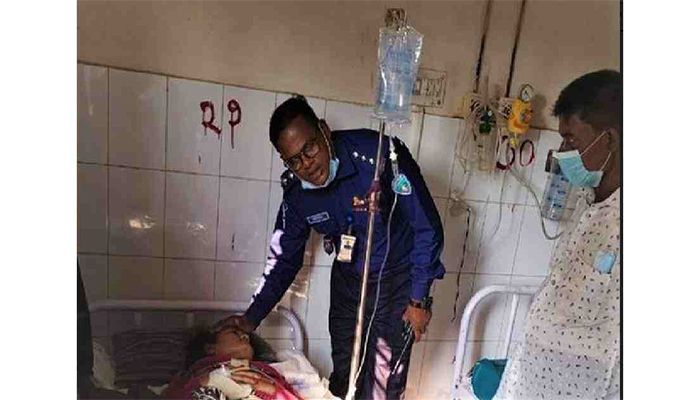 ﻿Has there been any change in the traditional practice of receiving and giving dowries in Bangladesh society? Now really! The devil of dowry still prevails here.

Amid concern over violence against women across the country, now a housewife of Rangunia Upazila in Chattogram faced barbaric tortures allegedly by her husband for dowry, reports UNB.

Yasmin Akhter, 30, wife of Mohammad Salimullah Ruffel of Sandwippara in the Upazila, suffered severe burn injuries as Salimullah allegedly set fire to her for dowry on Friday.

Mahbub Milky, officer-in-charge of Rangunia Police Station, said Salimullah, 35, son of Shafiqul Islam married Yasmin, daughter of Harunur Rashid of Rangunia Upazila, eight years back and he started torturing her since their marriage for dowry.

On Thursday, the couple, blessed with a five-year-old boy, had a fight over dowry and on Friday Salimullah poured petrol over Yasmin’s body and set her on fire, leaving her critically injured.

On information, police went to the spot, rescued the victim and took her to Chattogram Medical College and Hospital as she suffered 40 percent burn injuries.

Salimullah even did not let her go outside when she desperately tried to save herself.

Salimullah also rubbed off the charred skins of the victim, said the ASP in his Facebook post. He even made a phone call to the victim’s parents so that they could hear Yasmin’s groaning.

However, local people caught Salimullah on Friday while trying to flee the village and handed him over to the police. Dowry is one of the most common forms of gender-based discrimination in Bangladesh. Every year thousands of women face serious social, psychological and physical tortures due to dowry-related disputes.

According to Odhikar, a human rights body, 5,699 women faced dowry-related violence from 2001 to 2017 and the rate of homicides and suicides due to dowry was also high during the period.

Odhikar stated that at least 256 women faced dowry-related violence while 129 women were killed or took their own lives in 2017.

The impacts of dowry practice are very harsh and alarming, as it causes physical, mental and social agonies. Issuing threats by the husband to divorce the wife and sending her back to her father’s family are a very common practice in Bangladesh if the demand is not fulfilled. Verbal abuses are another form of oppression.

Sometimes all this ends up in killings and brutal tortures.

Effective since 1980, this Dowry Prohibition Act made it illegal to exchange any form of property or valuable assets in the name of dowry. The law was amended in 2017.

The amended Dowry Prohibition Act 2017 stipulates penalties of five years in jail and Tk 50,000 in fine for demanding, receiving and giving dowry.

In the old law, the punishment for demanding, giving or receiving dowry was a minimum one-year prison term and a maximum of five years in jail or up to Tk 5,000 fines or both.