Maldives to Hire Workers from Bangladesh 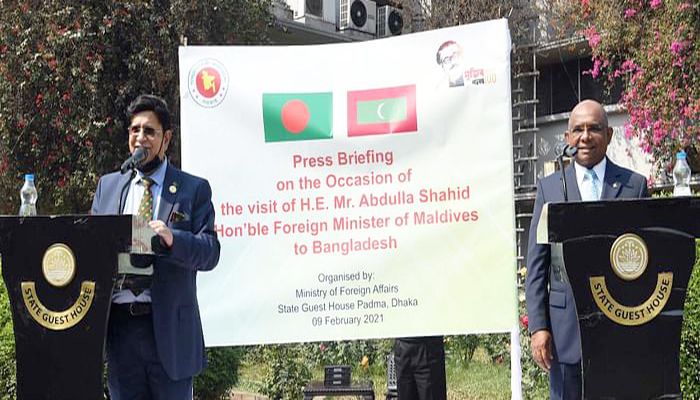 Foreign minister AK Abdul Momen and his counterpart from the Maldives Abdulla Shahid at a joint press briefing after bilateral talks at state guesthouse Padma on Tuesday. Photo: Collected from PID

﻿The Maldives will recruit workers from Bangladesh by creating a solid framework under an agreement, said visiting foreign minister of the Maldives, Abdulla Shahid.

''Today we'll be signing two memoranda. The memorandum of understanding (MoU) on the placement of human resources between the two countries to provide a solid framework for the recruitment of human resources from Bangladesh,'' he said at a joint press briefing after bilateral talks at state guesthouse Padma.

Foreign minister AK Abdul Momen and his counterpart from the Maldives Abdulla Shahid led their respective delegations during the talks.

Abdulla Shahid said the Maldives put emphasis on the regularisation of undocumented Bangladeshi workers to ensure their basic rights in his country.

''I conveyed the important role played by Bangladeshi workers in [the] Maldives and the need to regularise the undocumented workers for protecting their basic rights and wellbeing,'' he said.

The Male Foreign Minister reiterated the support of the Maldives to Bangladesh on the issue of Rohingya refugees.

Abdulla Shahid recognized with gratitude about Bangladesh's significant contributions to a variety of fields, including training and scholarship, health and medicine, defense and other technical areas.

''Bangladesh is a prepared destination for our medical interns. Bangladesh is always steadfast partner and most recently proved its generosity towards to the Maldives with assistances extended to the government of [the] Maldives in the fight against COVID-19 pandemic on multiple fronts,'' he said. About the manpower recruitment, the Bangladesh foreign minister said the Maldives will recruit some nurses from Bangladesh. Some Bangladeshi physicians have already started working there, he added.

During the meeting, they discussed a whole range of issues, including the extension of trade and business, enhancing connectivity, particularly shipping and climate ones, he said adding that they also talked about national, regional and international matters.

''We had good discussions in a cordial atmosphere. We’ve agreed on many issues. Hope, we’ll have better days,'' said Momen.

The Foreign Minister of the Maldives arrived here on Monday on an official visit to Bangladesh at the invitation of his Bangladeshi counterpart Momen.