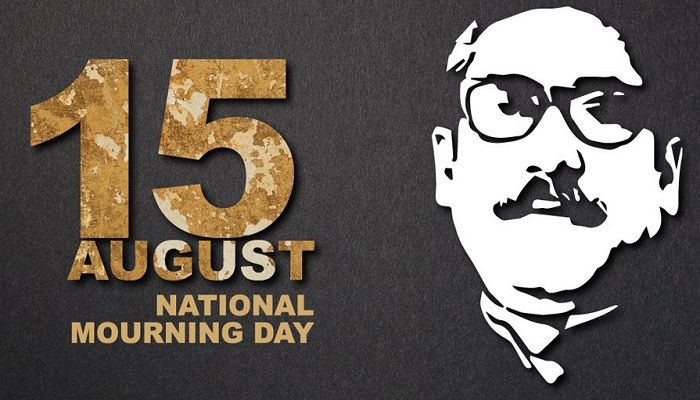 ﻿The government has taken elaborate programs to observe the 46th martyrdom anniversary of Father of the Nation Bangabandhu Sheikh Mujibur Rahman and National Mourning Day on August 15 with due respect and solemnity and maintaining social distancing due to COVID-19 pandemic.

As part of the program, the national flag will be hoisted at half-mast at all government, semi-government and autonomous buildings, educational institutions and private offices on the day, said an official release here today.

Floral wreaths will be placed at the portrait of Father of the Nation Bangabandhu Sheikh Mujibur Rahman in front of Bangabandhu Memorial Museum in the city and a doa mahfil will be held there at 6.30 am on August 15.

President Abdul Hamid and Prime Minister Sheikh Hasina will pay homage to the architect of the independence by placing wreaths at the portrait of Bangabandhu in front of Bangabandhu Memorial Museum at Dhanmondi Road No. 32 in the capital.

Guard of honour will be provided by the Armed Forces and prayers will also be offered.

Floral wreaths will be placed at the graves of Bangabandhu’s martyred family members and other martyrs of August 15, 1975, at Banani Graveyard in the city. Fateha will be offered and doa mahfil will be held there at 7.30 am on the day.

Wreaths also will be placed at the grave of Bangabandhu Sheikh Mujibur Rahman at Tungipara in Gopalganj district around 10 am. Fateha will be offered and a special doa will be held there maintaining social distancing due to coronavirus.

The Prime Minister is expected to pay homage to the architect of the independence by placing wreaths at the grave of Bangabandhu there while a guard of honour would be given by the Armed Forces.

To mark the National Mourning Day, special munajats will be offered at all mosques across the country after Zohr prayers while special prayers will be performed at all temples, churches, pagodas and other places of worship at convenient time.

Bangladesh Betar and Bangladesh Television will air special programmes in observance of the National Mourning day.

National newspapers and magazines will publish special supplements on the occasion.

To observe the day, other programmes including poster printing, its distribution and screening of documentary films on Bangabandhu and posters on National Mourning Day will be hanged in important places.

Bangabandhu Memorial Museum will organize lecture on the biography of Bangabandhu and National Mourning Day using virtual platforms on request of the educational institutions and Shishu Academy.

Use of virtual platforms should get priority to holding the Mourning Day programmes.

In line with the national programmes, district and upazila administrations have chalked out their respective programmes, including discussions and doa mahfils, marking the National Mourning Day maintaining social distancing.

Use of virtual platforms should get priority to holding those programmes and government officials must join the programmes at district and upazila levels.

District councils and municipalities will join the programmes to be organized by the district and upazila administrations while city corporations, municipalities and union parishads will also take programmes coinciding with the national programmes, maintaining social distancing to observe the National Mourning Day with due respect at their respective institutions.