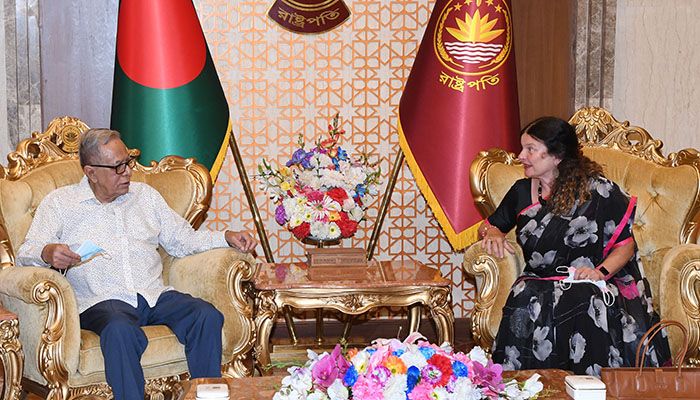 The President came up with the call as Rensje Teerink, EU ambassador to Bangladesh, paid a farewell call on him at Bangabhaban here this evening.

During the meeting, the President thanked the outgoing Ambassador for strengthening relations between the European Union and Bangladesh during his tenure, his press secretary Md Joynal Abedin briefed the newsmen later.

President Hamid said the EU is one of the development partners of Bangladesh and its cooperation in various fields, including trade, investment, migration, communication, climate change is contributing to the country's development.

He thanked the European Union for its assistance in achieving the SDGs (sustainable development goals) and hoped that this cooperation would continue in the days to come.

On forcibly displaced Rohingya from Rakhine state of Myanmar, Abdul Hamid also thanked the EU for providing humanitarian assistance to them.

The head of the state hoped that the European Union would continue to put pressure on Myanmar to end the repatriation issue.

The outgoing EU envoy lauded the steps taken by Prime Minister Sheikh Hasina's government to address the situation and keep the economy afloat.

She expressed her gratefulness to the President for his overall cooperation during her assignment in Bangladesh.