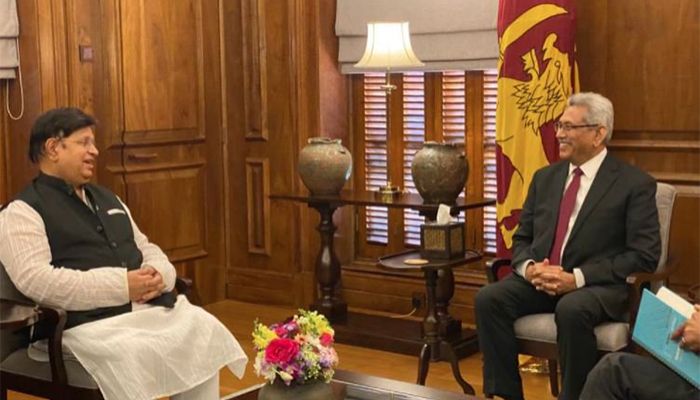 He made the remarks while Foreign Minister Dr. A K Abdul Momen paid a courtesy call on him at the Presidential Palace in Colombo, a foreign ministry press release said here.

During the meeting, the Sri Lankan President offered greater use of Colombo port for transportation of Bangladeshi trade goods.

For further promotion of tourism between the two countries, Bangladesh foreign minister underscored the necessity of affordable air ticket prices with enhanced air connectivity in participation with more air lines.

Dr Momen urged the President of Sri Lanka to take joint initiatives to fully utilize the trade potentials between Bangladesh and Sri Lanka.

He offered the government of Sri Lanka to explore the possibilities of importing pharmaceuticals and agro products including potatoes from Bangladesh.

In this regard, both sides welcomed the progress made for early conclusion of bilateral Preferential Trade Agreement for enhancement and facilitation of bilateral trade between Bangladesh and Sri Lanka.

Both the sides also agreed to expedite and complete the negotiations and approval process of pending bilateral instruments for greater benefits of the two country's peoples and increased bilateral engagements between the two countries.

Dr Momen reiterated his request for continued support of Sri Lanka for immediate repatriation of forcibly displaced Myanmar nationals to their home country with safety and dignity.

He is now currently staying in Sri Lanka in connection with the 18th BIMSTEC Ministerial Meeting and the fifth BIMSTEC Summit.

The Foreign Minister congratulated the President of Sri Lanka on successful hosting of the BIMSTEC Summit. The two sides expressed satisfaction over celebration of 50th anniversary of diplomatic relations between the two countries on March 04, 2022.

President Rajapaksa thanked Bangladesh for continued support in various multilateral fora and both sides further agreed to closely work together in the future.