Some Structural Issues Need To Be Fixed in Bhasan Char: USAID 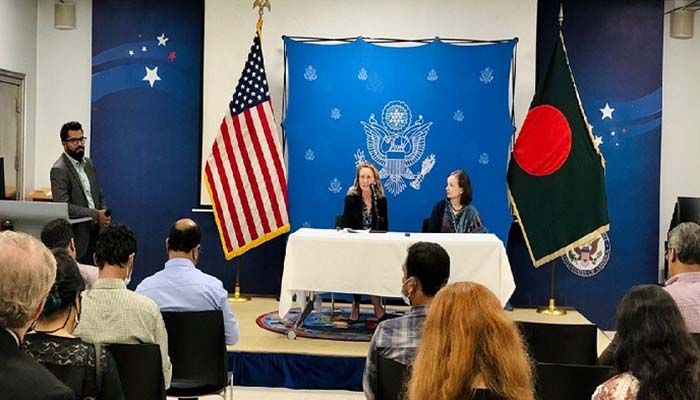 USAID Deputy Administrator Isobel Coleman has said there are some "structural issues" that need to be addressed in Bhasan Char before more people move to the Island.

Those already there need help to meet their basic needs with more livelihood opportunities, she said.

"We did talk about more livelihood opportunities for the people who are living in Bhasan Char. Housing (in Bhasan Char) is certainly an improvement over Cox's Bazar (camps)," she told reporters while addressing a press conference at American Centre in Dhaka on Wednesday, reports UNB.

Coleman who visited Rohingya camps in Cox’s Bazar and Bhasan Char said it is "more expensive" to support refugees in a "more isolated and remote area" while they will continue to work with their Bangladesh counterparts on the "issues of concerns."

Talking about environmental impacts, she said it is not yet known. She noted the government's efforts to protect it from flooding through embankments as it is a “fragile and vulnerable" area.

The efficacy and strength of the infrastructure of Bhasan Char and its disaster protection measures have been tested during the deadly cyclone AMPHAN, says the government of Bangladesh.

To address any extreme situation, it said, there are arrangements for evacuation in a timely manner as per the disaster response management framework.

Coleman, who is not optimistic about any immediate repatriation, said every single Rohingya that she met wants to go home but they want to make sure that a safe environment is in place for a "dignified, voluntary and peaceful" return.

"We must all remain hopeful that there will be a day when they will voluntarily return," she said before wrapping up her five-day Bangladesh tour which she says impressed her due to the "incredible progress" that Bangladesh has made on the socioeconomic front.

Coleman who will also visit Thailand and Laos as part of her tri-nation tour laid emphasis on giving access to education to all Rohingya children and noted the progress that has been made so far.

Earlier, Foreign Minister AK Abdul Momen, during a meeting with Coleman, stressed that the US may influence ASEAN members to persuade the Myanmar government to stop atrocities on its own nationals and take the Rohingyas back to their own land.

Momen appreciated the announcement of the US government to contribute US$ 152 million under JRP 2022 for the Rohingya Humanitarian Crisis.

Coleman deeply appreciated Bangladesh for hosting such a big number of Rohingyas from Myanmar stressing improving the provision of basic education, livelihood, communication, and transportation facilities in Bhasan Char.

Responding to a question, she said the ongoing crisis in Ukraine has put an enormous strain on global humanitarian assistance. "We'll always stand by Bangladesh and the Rohingya people."

However, she said they also have to be cognizant of the strain on the global humanitarian assistance right now in an unprecedented way.

"It's truly unprecedented," Coleman said, noting that the food crisis around the world with increased food prices is a very big global issue that is affecting humanitarian issues around the world.

Coleman said they are committed to continuing their support for the Rohingya response making sure that the refugees who are here receive what they need and their basic needs are met. "It's a priority for us."