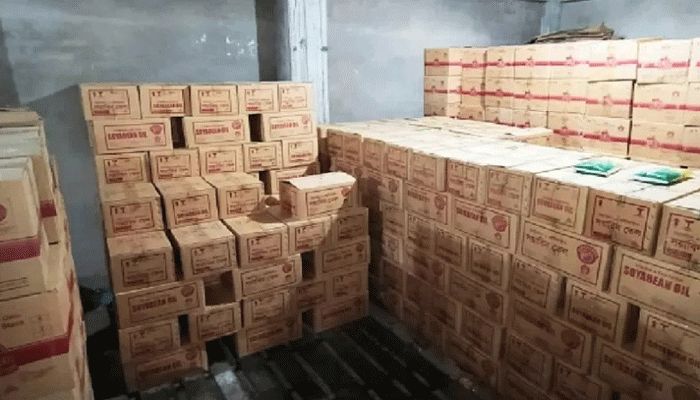 In Joypurhat, police in separate drives in the district town seized 43,656 litres of soybean and super palm oil from various warehouses and shops, which were illegally stockpiled to make additional profit by selling to the consumers at prices higher than the stipulated ones.

The mobile court fined two shops- Purushuttum Rongtar and Farook Traders- Tk 50,000 each for their alleged involvement in the hoarding.

The mobile court has also directed the shops to sell the edible oils at the price fixed by the government.

In Faridpur, a total of 4,800 litres of soybean oil were seized from a warehouse of Subol Store in the district.

Sohel Sheikh said, "Tipped-off, we conducted the drive at a warehouse of Subol Store and seized 4,800 litres of soybean oil."

The business organisation was also fined Tk 1 lakh and ordered to close the shop for the next 10 days, he added.

In Sylhet, the Directorate of National Consumers' Right Protection along with local administration seized 3,500 litres of soybean oil from a warehouse of Dariapara in the city.

The shop is Janapriyo Store, a dealer of Rupchanda soybean oil.

The directorate of National Consumers' Right Protection also fined shop owner Sujan Roy and sold the seized oil to the local consumers at price fixed earlier by the government.