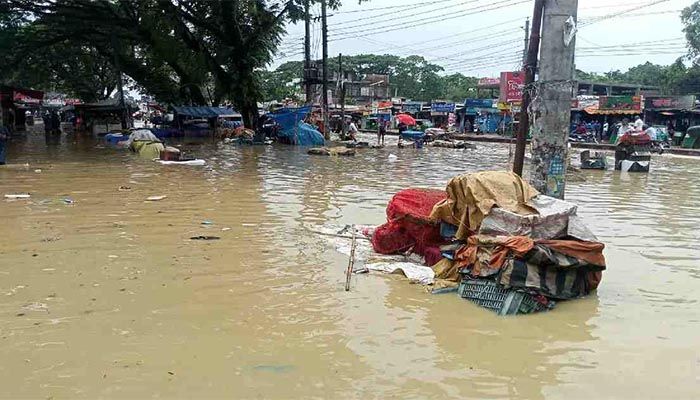 ﻿The overall flood situation in Sylhet deteriorated further on Tuesday due to the swelling of the Kushiara river caused by incessant showers over the last three days, rendering thousand of people homeless.

Besides, the Surma river was flowing above the danger mark at all points.

In fact, 60 percent area of Fenchuganj upazila has been flooded while the road link from Sadar upazila to Beanibazar upazila of the district remained snapped.

Balaganj-Khasrupur and Fenchuganj-Balaganj roads are also under water, officials said.

Many new areas of the six upazilas have also been flooded due to the rise in the water level of the Kushiara river.

Thousands of people have been hit by the floods, while shortage of food and drinking water has mounted the woes of the victims.

The victims alleged that they were yet to get relief materials from the government.

Meanwhile, the flood situation in Sylhet city, Biswanath upazila and Kanaighat upazila of the district remained the same with rains subsiding over the last couple of days.

Besides, the flood situation in Companiganj, Goainghat and Jointapur upazilas of the district has slightly improved with water levels in major rivers -- the Dhalai, the Pian, the Sari and the Lova -- subsiding. Over 90 percent areas of the three upazilas have been flooded.

The Army, the Navy, the Coast Guard, Border Guard Bangladesh (BGB) and the local police have been pressed into action to evacuate the flood victims of the district._UNB