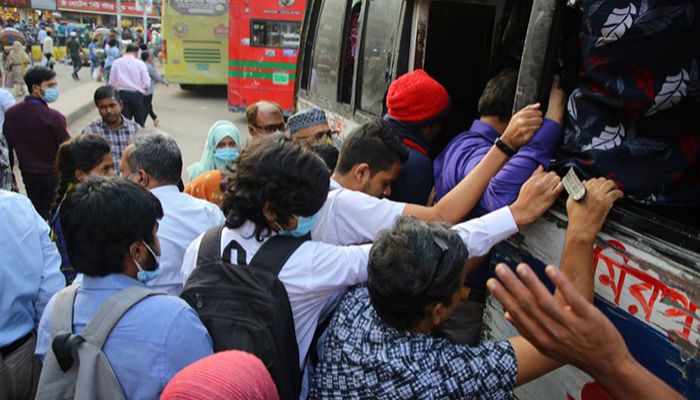 ﻿The hike in fuel prices by the government on Saturday has resulted in an acute transport crisis in Dhaka, causing untold suffering to commuters as a large number of buses stayed off the roads on Saturday morning.

In an abrupt move, the government increased the prices of diesel, octane and petrol by 42.5 per cent, 51.7 per cent and 51 per cent respectively Friday night. Currently, diesel is being sold at Tk 114 per litre, octane at Tk 135 per litre and petrol at Tk 130 per litre.

Transport owners decided not to operate buses following the government’s announcement, triggering a transport shortage in the capital.

Masuma Nasrin Rimi, a private employee working at a multinational company at Gulshan-1, waited in front of the Purobi Bus Stand in Mirpur-12 for two hours but couldn’t catch a bus. She had to share a CNG-run auto-rickshaw with another office goer to reach the Mohakhali Wireless Gate area.

“The CNG-run auto-rickshaw I was riding on couldn’t go any farther due to a blockade created by transport workers at Mohakhali Wireless Gate point. Finally, I reached the office by taking a rickshaw and walking some distance,” Rimi said.

“Fuel prices have increased by over 50 per cent but we can’t charge the passengers extra fares as we’re yet to receive any directive in this regard, which is unacceptable. We’re not operating our buses to avoid altercations with the passengers,” Hafizur said.

Although Saturday is a government holiday, many private companies usually keep their offices open on this day. As a result, private service holders were seen standing in long queues at various bus stoppages in the capital.

Many office goers were seen walking towards their respective offices after failing to find buses.

Some of them have expressed worry that the suffering will mount on Sunday as it is a workday.

Some people staged demonstrations in front of Shyamoli Sishu Mela in the morning protesting the fuel price hike.

Md Ashrafuzzaman, Manager (Operation) of Hanif Paribahan, said that although they run a total of 250 buses on four routes, they’ve operated only 120 buses from Saturday morning.

“We’re reducing the number of our buses due to the high cost of fuel. We won’t be able to operate buses from tomorrow if the fares are not adjusted with the hike in fuel prices,” said Ashrafuzzaman._UNB