Aquaponics: The Integrated Method of Cultivating Fish And Vegetables without Soil Being Popular in BD 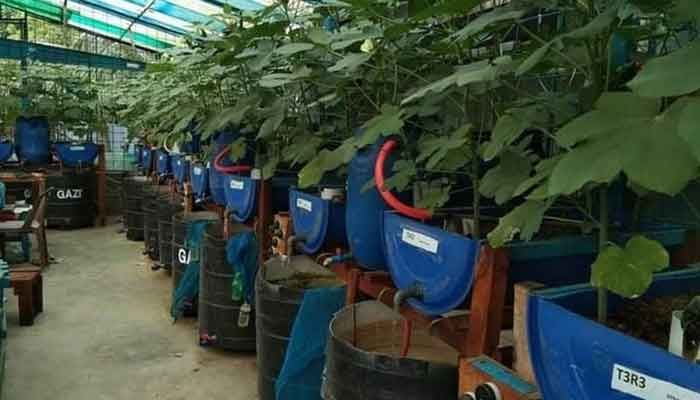 ﻿A method of cultivating fish and vegetables using only one infrastructure in a small space has become popular in Bangladesh and many young entrepreneurs, in particular, are now using it.

This method is known as aquaponics, where vegetables are grown without soil.

According to the Agricultural Information Service of the Government of Bangladesh, Aquaponics is an integrated method of fish and vegetable farming.

And in Bangladesh, the pioneer of this method is considered to be Professor MA Salam, a teacher in the Department of Fisheries, Bangladesh Agricultural University.

However, the aquaponics method is already prevalent in different countries of the world.

Professor Salam thinks that as the amount of cultivable land in Bangladesh is dwindling, Aquaponics has a bright future in the country in terms of fish farming and vegetable cultivation.

"It's a great thing for those who do rooftop gardening or fish or vegetable cultivation in a small area. It is possible to grow fish and vegetables in the same place and at a very low cost," he told BBC Bangla.

Professor Salam started growing vegetables on the roof of his house in 2010, and later added fish in 2011. However, the success of the aquaponics method has brought him a medal in agriculture.

In this, the dirty and polluted water from fish farming is used as food for the plants and from there the clear clean water is returned to the fish tank.

It is worth noting that this method allows vegetables to be grown without soil and that bacteria instantly remove all water wastes, dirt, etc. - the way an animal's kidneys and liver do.

Professor Salam says it is a perfectly natural method.

He said that aquaponics is basically a technique of growing plants and vegetables in water without soil. Here natural bacteria act as catalysts to help the plant produce its own food from fish waste.

The way this method works

Professor Salam said that once the hybrid system is installed, there is no need for much maintenance.

According to him, the basic principle of aquaponics is that the fish produces waste and feeds the plants and the plants clean the water for the fish - thus creating a continuous cycle.

When fish produce waste (ammonia), the bacteria convert it into nitrate, he said. A pump then carries this water to a tree tray. The tree purifies the water by taking nitrogen from that water and that clean water returns to the fish tank, which is considered safe water for the fish.

"This cycle repeats itself over and over again," said the Agricultural University teacher.

"On the one hand, the fish provides nutrients for the bacteria, on the other hand, the bacteria break down the fish waste and make nitrates to feed the plants. According to experts, the following benefits are obtained by cultivating fish and vegetables using the aquaponics method -

* Aquaponics does not produce any waste

* As it is an organic food production method, there is an opportunity to produce nutritious food

* Vegetable production is possible in a few weeks

* Can deal with the challenge of barren soil

* The method is natural and the source of fertilizer

* Once the system is up and running, there is no cost

* It can be done in any area and in any weather

* No need to buy-sell or store any kind of fertilizer However, success in aquaponics can only be achieved by tackling a number of challenges. These are -

* Technology-dependent method, so know better about this

* Timely maintenance and inspection of equipment

* Marketing of fish and vegetables in the fastest time According to the Agricultural Information Service, tilapia are the most suitable for aquaponics farming, as they are fast growing and can be farmed at higher densities.

Professor MA Salam, however, told BBC Bangla that aquaponics is a very effective method of cultivating koi fish as well as tilapia, and can be accompanied by any type of vegetable.

He said that the aquaponics method can produce ten times more fish than farming in ponds or other methods. That’s what other entrepreneurs are saying

Mahbubur Rahman, a former officer of Bangladesh Biman, has been cultivating aquaponics vegetables and fish on the roof of his house in Mirpur for three years.

"With proper care, great results are obtained. I have fish in two drums of 800 liters. If fed well, the fish takes the expected shape in 3/4 months. In fact, it will be popular as the next agriculture," he said.

He said that as far as he knows, many more are now advancing in this method of farming, and even a couple of companies have started bringing products produced in this way to the market. As many methods of aquaponics as:

The website of the Agricultural Information Service of the Government of Bangladesh has given some suggestions on aquaponics methods.

Macha method in pond: In this method, macha is made with bamboo mat. The platform has to be filled with forty bottles filled with half a liter of water. Then make many holes in the bottom of the bottle and arrange coconut husks and pebbles in it in layers, put vegetable seedlings in it and place it in the fish pond.

A total of 20 seedlings of Kachu, Mint, Kalmishak, Potato and Tomato can be used in each loft.

Plastic drum method: In this method, plastic drums are cut vertically in half and arranged in layers of pebbles and soil and seedlings of kachu, papaya and brinjal are planted. In this case the dirty water of the fish tank is pumped and supplied twice a day between the pebbles of the drum.

In this process the roots of the tree collect the necessary food and the clean water returns to the fish tank. The Agricultural Information Service says that this method of vegetable production has proved to be more effective and promising than any other method. Rack method: In this method, discarded plastic bottles are placed in the rack on the roof of the building. In a wooden rack five and a half feet high, 6 bottles are arranged horizontally, 16 in three rows from top to bottom and a total of 36 bottles on both sides.

Inside the caps of the bottles, a piece of sponge is used to place pebbles on it and two vegetable seedlings are planted in each bottle. It can plant 62 saplings in 36 bottles in a rack.

Galvanized method: In this method, a 5 'x 2 "-5" x 10 "tray is made of galvanized sheet and a 4 inch long pipe is placed there for discharge of water. Then vegetables are cultivated in a floating loft system with the help of a tray filled with water and in another one by arranging pebbles.

According to the Agricultural Information Service, vegetable seedlings grow faster in both the methods after taking care of some more.

*The Writer works in BBC Bangla