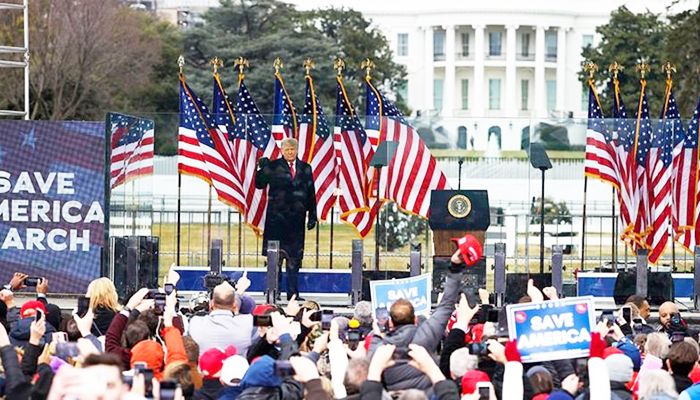 The Democratic Party of the United States is in the process of launching a parliamentary trial of President Trump for his role in Wednesday's attack on the US Congress.

Speaker of the lower house of Congress, Nancy Pelsey, says Mr. If Trump does not resign at this time, they will begin work on a constitutional provision aimed at justice.

Democrats are expected to file charges Monday against Trump for "inciting a coup."

They allege that a riot broke out inside Congress on Wednesday at the instigation of outgoing President Trump, killing five people.

Incumbent US President Joe Biden has said Congress will decide on the trial. However, he acknowledged that their numbers were not enough to defeat Donald Trump's presidency.

The White House has denied the allegations, saying it was "politically motivated" and would "further divide our great nation."

In the House of Representatives, 160 members of the Democratic Party have already signed the draft Article of Impeachment.

California Congressman Ted Liu and Rhode Island congressman David Cecilin began writing the draft law in the wake of Donald Trump's trial while he was caught up in a massive riot in Congress on Wednesday.

If the initiative is really effective, it will be Mr. The House of Representatives' second round of efforts to try Trump.

Earlier, in December 2019, Mr. in the lower house of Parliament on charges of abuse of power and obstruction of the work of Congress. Trump is on trial.

But in February of the following year, both allegations were rejected in the upper house of parliament, the Senate.

No president in US history has faced trial twice. However, Mr. Trump's punishment is less likely because of Mr. in the Senate. Trump's party, the Republican Party, is quite strong.

Lisa Markowski, a moderate Republican from Alaska in the Senate, told the Anchorage Daily News that Mr. Trump's "should be cut now."

Nebraska Republican Senator Bess Sassy regularly met with Mr. Criticizes Trump. He says he will support the trial if it is initiated.

However, Mr. There is still no evidence that most members of his party are in favor of Trump's punishment.

This means that Mr. in the lower house of Parliament for the Congress riots. Any Trump trial would be largely symbolic.

According to an internal memo from the Senate, the Senate will not be able to consider any decision from the lower house for approval before January 19. And that will be Mr. The day before Trump left power.

In this case, even after leaving power in the Senate. Constitutional experts disagree on whether Trump's trial can continue.

If convicted, Mr. Trump will not receive any of his salaries.

The senators may also approve the proposal so that he will not run in any future elections.

The only thing that has moved US politicians in the wake of the congressional riots is that at their request, Democratic House Speaker Nancy Pelosi has spoken to top US military commanders to persuade Mr. Trump cannot use nuclear weapons codes.