Perseverance on Mars, 4 Indians in History 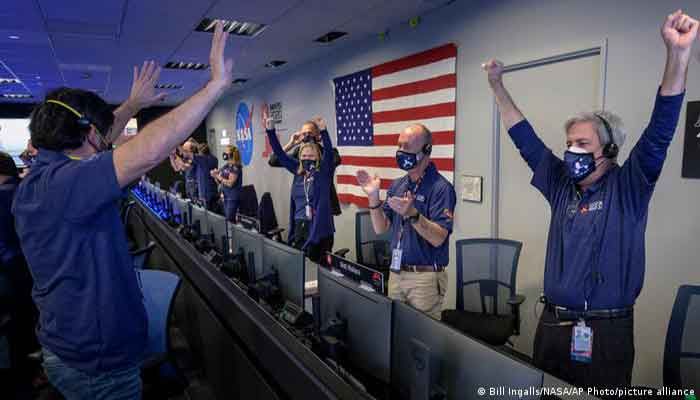 NASA Perseverance has successfully landed on Mars. Four Indians associated with this project. Two of them are Bengalis.

NASA's state-of-the-art spacecraft Perseverance landed on Mars at midnight on Thursday. At the same time history was made. This is the first time a state-of-the-art helicopter engine has flown to Mars. This helicopter tied to the lander's stomach will fly in the sky of Mars. Will collect pictures. At the same time, the names of four Indian descent became famous in history. Two of them are Bengalis. Lander Rover Perseverance landed at NASA around one o'clock in the night Indian time. This is NASA's third successful landing on Mars. The spacecraft will orbit the Red Planet for the next ten days. The spacecraft is supposed to collect stones and soil from there and bring them to earth. Scientists will search for life on Mars by examining all of them. The spacecraft will also collect pictures of Mars. And this is the first man-made helicopter to fly in the sky of Mars. Ingenuity will take the picture of the details of Mars from above. Rover Perseverance landed on the Jezero Crater north of Mars. American Curiosity has already sent pictures of the region to NASA. But Rover will do much more in this area. At the moment, the curiosity distance from the rover is about 3600 kilometers. The US spacecraft is located in Gail Crater.

Four Indian descent are involved in this historic landing of perseverance. Two of them are Bengalis. Swati Mohan of Bangalore is the Head of Guidance, Navigation and Control Operations (GN&C) at Perseverance. The second person is also a resident of Bangalore. His name is Jay Bob. He is the Chief Engineer of Ingenuity Helicopters. This is the first time a NASA helicopter has flown to another planet. As a result, Balaram has taken an important place in history.

The name of the third person is Anubhav Dutt. He is a professor in the Department of Aerodynamics and Aeroelectricity at the University of Maryland. For those who started dreaming of flying a helicopter on the Red Planet three decades ago, Mahishadal's feeling is one of them. The engine has been designed with their thoughts. There is also Soumya Dutt from Burdwan. Although a resident of Burdwan, he moved to the United States when he was in sixth grade after studying in Dehradun, Mumbai as a child due to his father's job. The huge parachute that slowed down the rover and landed on Mars was made by Soumya. The height of this 21 meter diameter parachute is equal to 15 people. When the rover was speeding towards Mars, the parachute opened in just one to two seconds. With its help, the speed of the rover comes under control. And landed properly in the end.