Jute Cultivation in BD: Is Golden Fiber Back Again?

Harun-ur-Rashid, a farmer from Faridpur, planted jute on the land where he had cultivated paddy till last year.

One third of the Jute is cultivated in the greater Faridpur district. However, due to the recession, the farmers turned away from jute cultivation. But as they made good prices from last year, farmers have become interested in jute cultivation again. 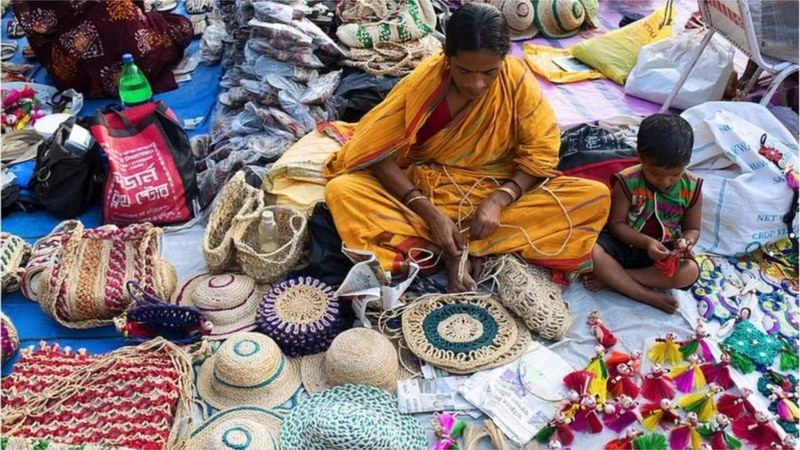 According to the Department of Agricultural Extension, jute has been cultivated in eight and a half lakh hectares of land in Bangladesh this year. Production has been more or less 9 million bales (one bale in 182 kg).

An average of nine manus of jute has been cultivated per bigha. In most places jute has been sold for more than three thousand taka per manus.

Why the demand for jute is increasing

Md. Ayub Khan, Director General of Jute Research Institute, Bangladesh, told BBC Bangla that there is a demand for natural fiber all over the world instead of plastic or synthetic fiber. A variety of products are being made.

He said that due to better prices, farmers have also become more interested in jute cultivation.

According to those involved in the jute sector, there is a large market for jute in neighboring India. They say that besides exporting raw jute from Bangladesh to India, jute is also smuggled illegally.

Israt Jahan Chowdhury, an exporter of jute products, says that one of the reasons for the increase in jute prices is that an unscrupulous group has stockpiled jute and increased the price. Another reason is that some jute has gone 'unofficially' in the neighboring country. That is why the price of two and a half thousand taka per maund of jute has reached six thousand taka.

Although Bangladesh is the largest country in jute production, India is occupying the current world market for jute.

These jute raw materials produced in Bangladesh are mostly exported to India and foreign buyers buy these products from India.

What is being made with jute now?

In Bangladesh, jute has been used for a long time to make jute yarn, rope, sacks, packing equipment, bags or sacks, hand-picked fibers and jute cloth.

Besides jute fiber, a big market has also been created for jute chalk, he said. These products are used in particle board, composite, celluloid.

According to the Export Promotion Bureau, Bangladesh has earned 116.14 crore in foreign exchange by exporting jute goods in the fiscal year 2020-2021, breaking a one-decade record.

Compared to the previous year, the export of jute products has increased by 31 percent last year.

Although the private sector produces and exports jute products, 26 state-owned jute mills have been closed since July 1 last year due to losses.

After the increase in the price of jute last year, exporters have bought jute at a price of more than Tk 6,000 per maund.

However, exporters fear that if the price of jute goes so high, it could have a negative impact.