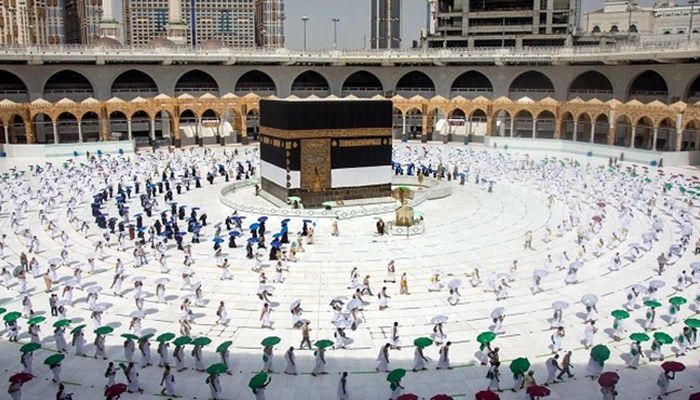 Pilgrims were performing hajj during the pandemic || Photo: Collected

﻿Under government management, the minimum package for Hajj this time has been fixed at Tk 4 lakh 62 thousand (Package-2). Pilgrims will be located within 1,500 meters of the Grand Mosque in Mecca under this package.

State Minister for Religion Faridul Haque Khan Dulal made the announcement at a press conference at the Secretariat on Wednesday (May 11).

He said two packages have been officially announced this year. Package-1 will cost Tk 5 lakh 27 thousand 340 to go for Hajj. Passengers of this package will be within one thousand meters of a distance of Masjid al-Haram.

He added that a package of Tk 4,56,530 has been proposed for privately managed pilgrims. However, privately managed Hajj agencies will be able to announce multiple packages in mark with Government Management Package-1 and Package-2.

The holy Hajj may be held on July 9, subject to the sighting of the moon. This year, 57,856 people will be able to go for Hajj from Bangladesh.

Saudi Arabia has not allowed anyone from abroad to perform the Hajj after the coronavirus epidemic hit the world. According to official data, 58,745 people performed Hajj last year. Hajj is usually celebrated with the participation of 2.5 million Muslims every year.

This time Saudi Arabia has decided to allow 1 million pilgrims to perform Hajj on two conditions.