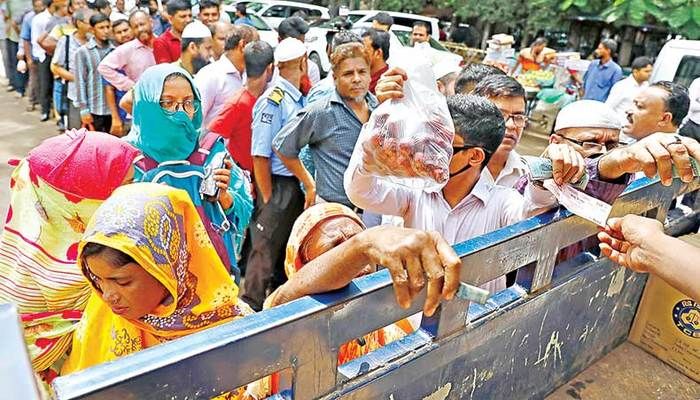 Prices of onions shoot up to Tk 120 a kilogram on Monday in the city’s kitchen markets as India imposed a ban on export of the item on Sunday.

Amid continued price hike of onions, commerce secretary once again urged consumers not to be worried saying that the stock of the commodity remained satisfactory in the country.

The prices of onions increased by Tk 40 a kg in a day with the news of export ban of the commodity by India on Sunday to increase availability of the commodity in its domestic market and contain rising prices.

Traders said that hours after the imposition of export ban on onions by India the prices of the item increased by Tk 30 a kg in the wholesale market at Shyambazar in Old Dhaka in the city.

One of the wholesalers told New Age that onions were traded at Tk 85-90 a kg at Shyambazar wholesale market.

The local variety of onions was retailing for Tk 110-120 a kg and the onions imported from India were selling for Tk 100-110 a kg on Sunday in the city market.

Despite a drastic hike in prices of onion, commerce secretary Md Jafar Uddin on Monday said that people should not worry about the price of onions as the stock of the commodity remained sufficient in the country.

He also warned traders not to manipulate market, saying that we are monitoring the market and if anyone involved in hording of onions would be punished.

The commerce secretary in his office at Bangladesh secretariat told reporters that already two onion-laden ships reached at Chattogram port from Myanmar and a huge quantity of the commodity remained in the pipeline from Turkey and Egypt.

Jafar Uddin said that Trading Corporation of Bangladesh started open market sale of onions through 35 trucks in the city and hopefully prices of the commodity would be eased soon.

People queue up at a TCB open market sales outlet near the National Press Club in Dhaka on Monday amid soaring prices of daily essentials. — Abdullah Apu

The Directorate General of Foreign Trade under the commerce ministry of India in a notification on Sunday prohibited export of all varieties of onions until further order.

Indian media reported that retail prices of onions skyrocketed to Rs 60-80 per kg in Delhi and in some other parts of the country due to supply disruption from flood-affected Maharasthra, one of the growing states.

The DGFT on September 13 had imposed a minimum export price of $850 per tonne to curb its shipments and help bring down rising domestic prices.

After setting MEP by India the prices of onions increased by Tk 15-20 a kilogram to Tk 55-65 a kg in Bangladesh on September 14 as India was one of the major sources for the country to import the commodity.