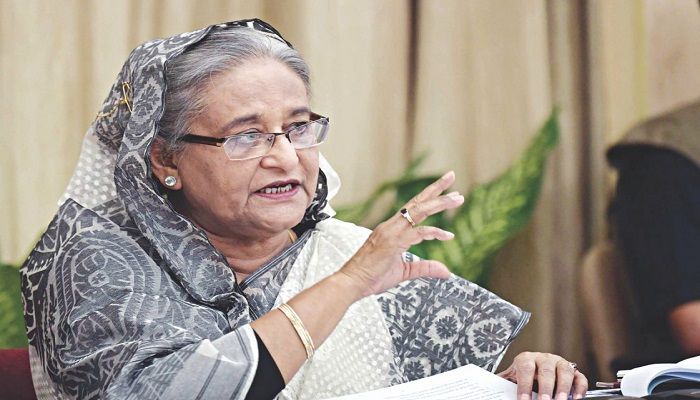 She also laid foundation stone of another project Gandhapur Water Treatment Plant at Rupganj in Narayanganj having capacity to treat 60 crore litres of water.

The premier inaugurated and laid foundation stone of the three projects at function in a hotel in Dhaka.

While the Gandhapur Water Treatment Plant at Rupganj in Narayanganj will treat 50 crore litres once it is completed.

The plants have been constructed to meet the growing demand of drinking water of Dhaka city dwellers.

Water from the Padma River will be treated at the plant and then it will be sent to Dhaka city through a pipeline.

The construction of Padma Water Treatment Plant project is being implemented at a cost of Taka 3,451 crore.

With a view to reducing the dependency on groundwater in Mirpur, which has suffered the largest fall in the water table compared to other areas in the capital, Dhaka WASA has taken an initiative to bring 15 crore litres of water per day for the neighbourhood from nearby Savar. It will cost Tk 573 crore.

Under the “Well field construction project at Tetuljhora-Bhakurta in Savar Upazila (Phase-1)”, 46 production wells and 48km water transmission lines will be set up to extract groundwater and supply it to Mirpur.

The premier also laid foundation stone of the Gandhapur Water Treatment Plant at Rupganj in Narayanganj under the project of Dhaka Environmentally Sustainable Water plant project.

It will be set up at a cost of about Tk 5,600 crore to treat 50 crore litres of water from the river Meghna per day.

The project will be funded by the Asian Development Bank, the French Development Agency (AFD), the European Investment Bank and the Bangladeshi government.

Of which, 22 percent water comes from surface sources and 78 percent from ground water.

The fast-growing city of Dhaka faces a rapidly diminishing supply of groundwater, which is the main source of drinking water for its 11 million inhabitants.

A video presentation was also screened on various projects taken by Dhaka WASA in the last 10 years to meet the growing demand of water in the capital.