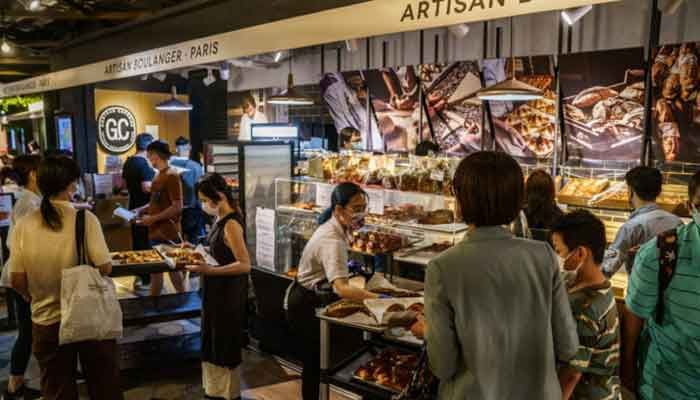 China's economy continued to boom in April from the record growth in the first quarter, with strong exports and rising business confidence supporting the recovery.

That's the outlook of an aggregate index combining eight early indicators tracked by Bloomberg, which remained unchanged from March in strong expansionary territory. Some of the strength this month may be exaggerated by the comparison with April 2020, when the country was still struggling to recover and reopen after a lockdown to contain the world's first coronavirus cases. 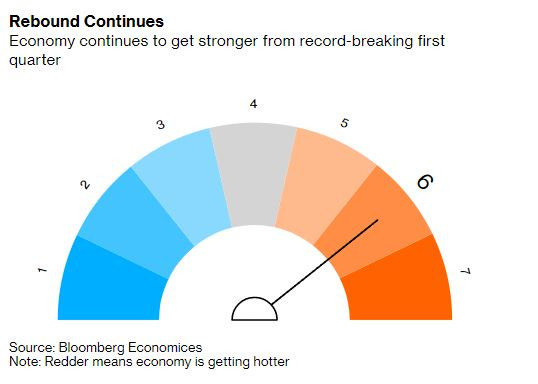 Confidence among small and medium-sized enterprises, or SMEs, picked up for a second month in a survey of more than 500 companies by Standard Chartered Plc., with the rise in expectations pointing to even stronger performance in the current quarter compared to the first three months of the year.

"Export-oriented SMEs continued to outperform domestically-focused SMEs, with faster production and higher output price gains," according to Standard Chartered's economists Lan Shen and Ding Shuang. "The services sector is catching up at a faster pace, driven by the transport and logistics, IT, and commercial services industries, while the catering and accommodation sectors remain sluggish."

The improvement in services was due to the "removal of restrictive measures and vaccine rollout," they wrote in a report. "While export demand stayed resilient, domestic demand also started to pick up."

Three Reasons to Believe in the Boom on Bloomberg Trade Tracker

The strength of overseas demand can be seen in South Korea's exports in the first 20 days of the month, which jumped more than 45% compared to the same period a year earlier, the fastest pace since 2011. 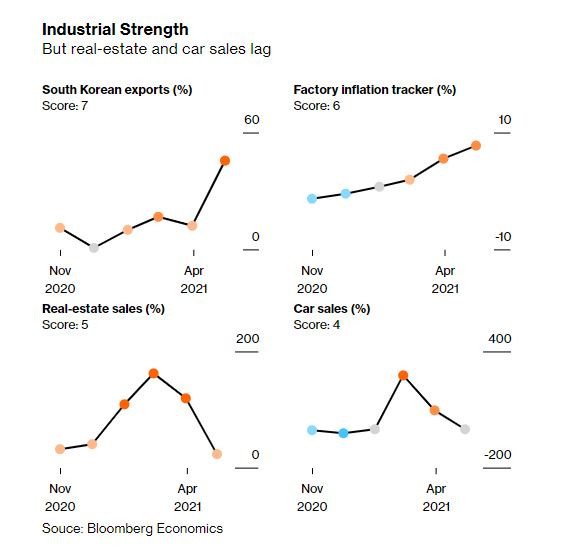 Global demand has driven up commodity costs, boosting factory-gate inflation in China to its highest since 2017, according to Bloomberg Economics' price tracker. Copper prices approached the nine-year highs reached in February, while steel futures in China reached new peaks even as rebar stockpiles shrank slightly. 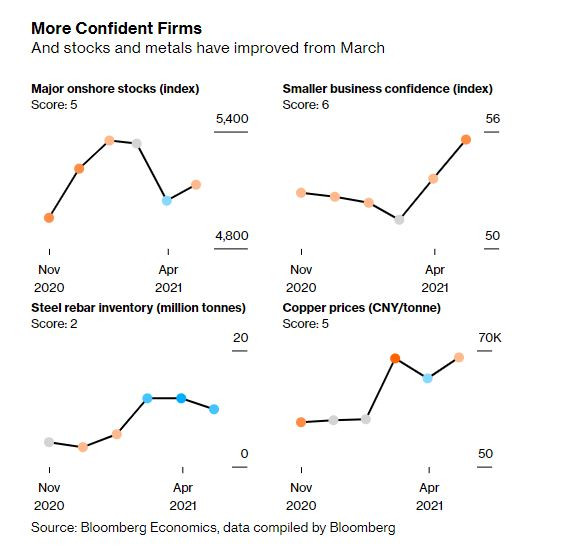 China's stock market moved higher in April, with the benchmark index of 300 mainland companies bouncing back to levels above 5,100.

Home sales continued to grow in the month, although the pace was less robust than in March. Regulators have been trying to control housing risks after monetary easing spurred a rebound in the residential market, with buyers using property to hedge against inflation. Car sales growth in the same period slowed slightly.

Bloomberg Economics generates the overall activity reading by aggregating a three-month weighted average of the monthly changes of eight indicators, which are based on business surveys or market prices.