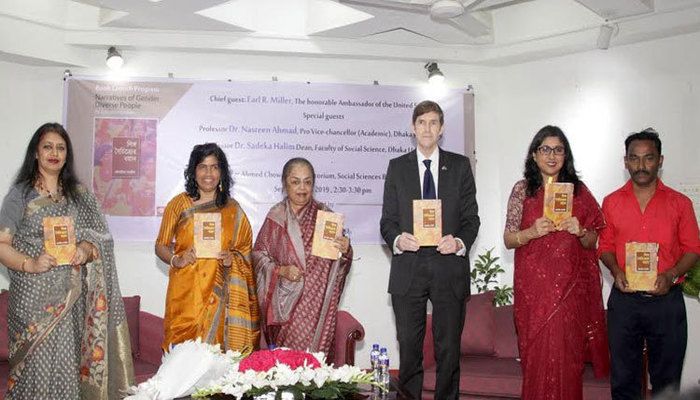 ﻿Cover of a research publication “Narratives of Gender Diverse People” authored by Associate Professor Dr. Zobaida Nasreen of the Department of Anthropology of Dhaka University (DU) was unveiled on Wednesday, reports BSS.

US Ambassador Earl R. Miller unveiled the cover of the book at a program held at Prof. Muzaffar Ahmed Chowdhury Auditorium on the campus.

While addressing the meeting, US Ambassador Earl R. Miller said, “the third gender people are facing various hurdles and problems in many parts of the world.”

Stressing the need for involving them with the mainstream of society, he said, “everybody should pay respect to the opinion of the third gender people.”

DU Pro-Vice-Chancellor (Academic) Professor Dr. Nasreen Ahmad and Dean of the Faculty of Social Sciences Prof. Dr. Sadeka Halim addressed the meeting as special guests with Chairperson of the Department of Anthropology Prof.

“We have to remove gender discrimination from society. The mass people have to change their mindset about the third gender people,” said Prof Nasreen.