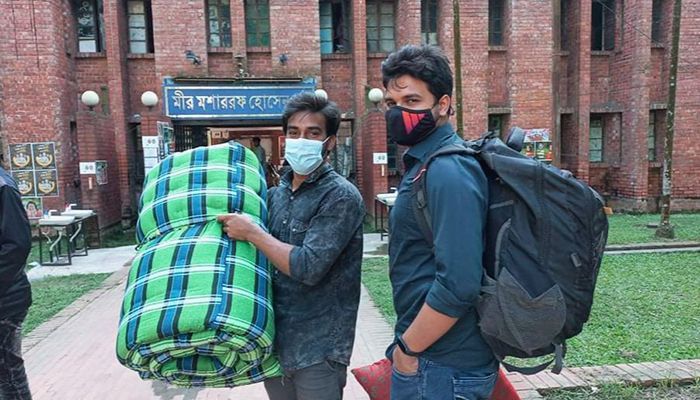 ﻿﻿Although the gonoroom system was supposed to be closed in Jahangirnagar University to prevent coronavirus infection, the first-year students of (JU) had to take their place in the gonoroom.

Students started gathering in front of their respective halls on Tuesday (November 30) morning. Everyone expected a seat as Jahangirnagar University is the only fully residential university in the country.

But the students didn't get their desired seat even though they were waiting all day long with full of worries.

1st-year student Sanjay Kumar has come from Kurigram with the excitement of getting up in his room. Expressing frustration at being offered a place in a gonoroom, he said, "I was admitted to JU knowing full-fledged residential university. Now I see that all the first year's students of a hall has to sleep in one large room. It's hard to sleep on the floor on a winter night. "

Although the gonoroom system was supposed to be closed, when asked about the decision of the administration later, the chairman of the provost committee of the university and the provost of Bangamata Sheikh Fojilatunnesa Mujib Hall, Professor Md. Mujibur Rahman said, "we are aware of the crisis of seats in residential halls. We have tried to bring at least 50% of students under the dormitory facility, but the crisis could not be avoided as many of the 44 batches are still stationed in the halls. However, even in gonorooms, students have been kept at a certain distance following the hygiene rules. Beds have been provided in some gonorooms as well."

Asked exactly how long the students would have to stay in the gonoroom, he said, "Work on our new halls will be completed by this year. Hopefully, within the next one-and-a-half months we will be able to arrange seats for the students from the gonoroom."

Incidentally, the JU administration has been opening residential halls since October 11 due to the drop in coronavirus infection. Ten days later, physical classes began, but it was decided to pick up the first-year students on November 30.