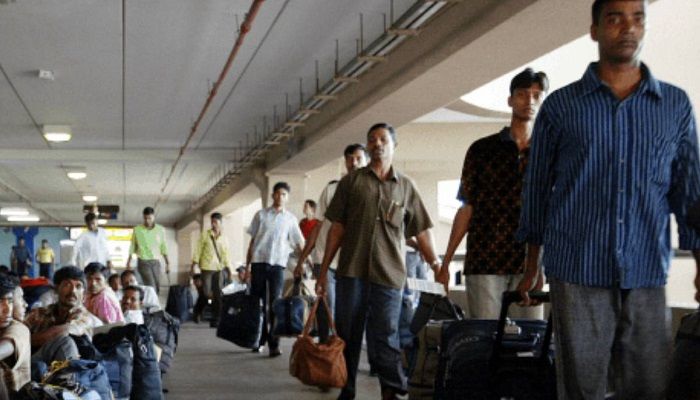 Babul had valid papers to stay back and work there but the police in Saudi Arabia deported him ‘forcefully’. Babul Hossain of Chandpur returned home last month barefoot and empty-handed in his uniform.

Babul is not the only worker to have been sent back from Saudi Arabia.

According to Brac Migration Program, some 16,000 workers were deported from Saudi Arabia this year while the number is 79,106 in the last five years.

Most of the workers had legal papers to stay back and work in Saudi Arabia but they were forced to leave the country on various allegations.

A total of 534 workers were deported from Saudi Arabia in the current month, said Shariful Hasan, head of Brac Migration Program.

He said workers were used to be sent back home in the past if they violated the recruitment rules but in recent times, workers were being forced to leave the country although they have legal papers.

Shariful urged the ministries concerned and the Bangladesh Embassy in Saudi Arabia to look into the matter.

He said recruiting agencies should ensure jobs for the workers when they reach Saudi Arabia on free visas and make sure that they do not face any problem there.

Babul along with 175 other Bangladeshi workers was forced to leave Saudi Arabia in September last.

Talking to UNB, he said he had permission to stay for another six months in Saudi Arabia but police sent him back. “They didn’t pay any heed to our words.”

Mahiuddin Ahmed of Munshiganj had been working in Saudi Arabia for the last 10 years legally but Saudi Immigration Police arrested him recently and beat him mercilessly before sending him back home.

Ninety-three workers returned home on October 9 while 105 on October 8, 120 on October 4 and 130 were deported from Saudi Arabia on October 3.

On September 17, Abu Bakkar came home with a group of 160 Bangladeshi workers from Saudi Arabia.

Bakkar said Saudi police sent him home empty-handed although he has permission to stay and work there.

Jamal of Chandpur told UNB that he renewed the permission (akama) to stay in Saudi Arabia with 4,500 Riyals but police sent him back to the country in two months.

Bayazid of Patuakhali, Abu Sayeed of Manikganj, Nasim of Madaripur, Jamal of Cumilla, Mizan of Munshiganj, Tipu Sultan of Brahmanbaria, Siraj of Madaripur and Jahurul of Kushtia also complained of the same.

They all said Saudi police put them behind bars for a few days and forced them to leave the country.

Workers with no legal papers are being forced to leave the country while some others were also being sent back as they sell vegetables or work as hawkers in addition to their scheduled work, he said.

Shameem, however, admitted the deportation of many legal workers, saying the Bangladesh Embassy there should look into the matter.

Asked about the number of workers who returned from Saudi Arabia, DM Atiqur Rahman, director (Employment) of the Bureau of Manpower, Employment and Training (BMET), said some workers are coming back home. “But I can’t tell you the exact number now.”

According to sources at BMET, around 257,317 workers went to Saudi Arab last year while 234,071 till August of the current year.