'Music Against Hunger': The Charity Concert 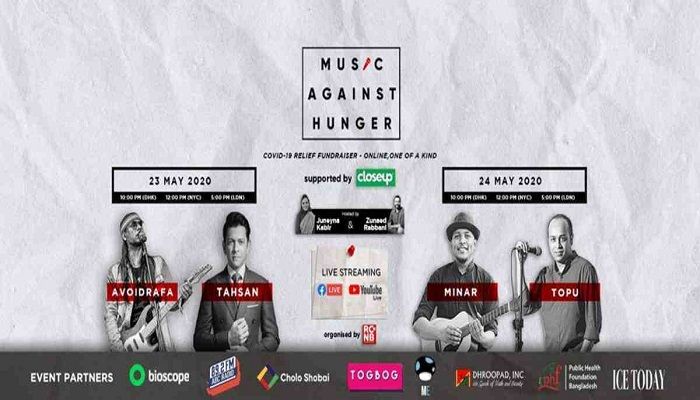 ﻿The first installment of a two-night residency in virtual space through Facebook, titled ‘Music Against Hunger’, is set to invade living rooms, dormitories, bedrooms and wherever else Bangladeshis may crawl into wherever they may be resident in today’s world - with the same noble aim as another famous gig in the nation’s history.

To paraphrase the chorus to the song written by a fairly well-known Beatle back in the day: 'give some of your bread, to get the starving fed.' Or as the cry went up, more famously from the outro: 'Relieve the people of Bangladesh'.

Back then, it was the ravages of war, at once terrible yet necessary. Today it is in the midst of a pandemic that has fair-well brought the entire human race to its knees. Every nation is fending for itself only. Madison Square Garden? Not open. Thankfully, almost 50 years later - we don’t need them.

Today the task falls upon every Bangladeshi, or scrap that - anyone in any corner of the world, who traces a lineage, a feeling, a language, that tugs at their heart's strings (the music!) from that land wrought in blood and fed by rivers, where 'Sylhet' and 'Chittagong' and 'Dhaka' all come together - to pool our resources. The emaciated child with the begging bowl in front of the world no longer cuts it. We know where we've been - the Valley and the Wharf and among the Bedouins, fairly buzzing with your accent from Noakhali. Let’s now give back to where it all began - where people are still dying, as the 'hunger victims' of COVID-19.

As long as that music we all love is playing, you know there's no end to our possibilities.

And so heading into the occasion of Eid-Ul-Fitr, the special concert is being organized by Resource Co-ordination Network Bangladesh (RCNB) with the participation of four of the heartthrobs of Bangladeshi music - Raef Al Hasan Rafa, Tahsan, Minar and Topu.

The concert, hosted by Zunaed Rabbani and Juneyna Kabir, will be broadcast live from the official Facebook page of 'Music Against Hunger' at 10 pm on Saturday. Rafa and Tahsan will participate in the concert on the first night, and Minar and Topu will participate on the second and last night on Sunday.

Online streaming platform Bioscope will also stream the concert at the app and private FM Radio station ABC Radio will broadcast the concert at their Facebook page at the same time. Hosts Zunaed Rabbani and Juneyna Kabir are also the co- in-charges of the concert.

Aiming to help the pandemic affected people who are financially devastated by the Coronavirus scourge, the fundraising concert is an opportunity to donate towards vulnerable families in Bangladesh and session musicians whose livelihoods have been severely affected by COVID-19, stated the event organizers.

Food items will be distributed to the needy people in different districts of the country through the fundraising concert. According to the organizers, the Public Health Foundation of Bangladesh will distribute the collected money. Financial assistance can be sent to the Public Health Foundation of Bangladesh's Prime Bank account number 2503116000594.

Voluntary organization Dhroopad will be accepting and distributing all the concert proceeds collected from outside Bangladesh. International donors can donate to the campaign through PayPal at registrations@dhroopad.org

Close-up and Bioscope and ABC Radio are co-sponsoring the concert online. For further information, please visit Hunger's event page at Facebook and https://choloshobai.com/campaign/music-against-hunger/.