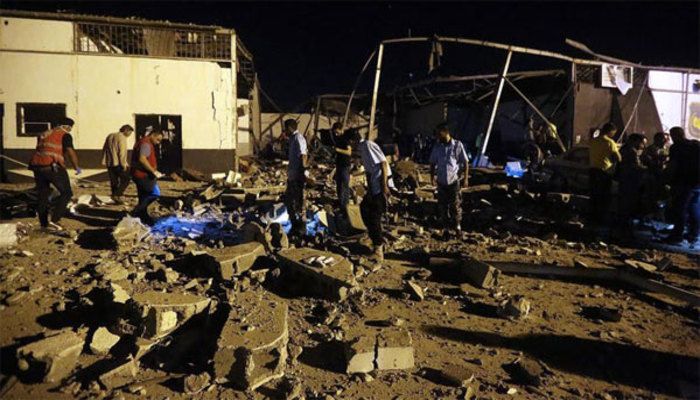 At least seven civilians were killed, most of them foreign workers, and 30 injured in an airstrike Monday that struck a biscuit factory in southern Tripoli, Libya’s health ministry said.

Ministry spokesman Amin al-Hachemi told AFP that two Libyans and nationals from Bangladesh, Egypt and Niger died when the factory in Wadi Rabi took a direct hit, with foreign workers also accounting for the 30 injured.

The suburb has been at the center of an attack launched in April by Field Marshal Khalifa Haftar’s forces to grab control of the capital from fighters loyal to the Tripoli-based Government of National Accord (GNA).

Pro-GNA forces, on their Facebook page, charged that the raid was done by United Arab Emirates drones in support of Haftar, from whose camp there was no immediate reaction.

The military strongman is supported by Saudi Arabia, Egypt and the UAE, while Turkey and Qatar back his rival, the United Nations-recognised GNA.

Libya has been involved in chaos since a NATO-backed uprising that toppled and killed dictator Moamer Kadhafi in 2011.

The battle for Tripoli, which has come to a dead stop on the ground after initial advances by Haftar’s forces, has killed more than 1,000 people and displaced about 120,000 others, according to the UN.

The United States last week urged Haftar to call off his offensive and accused Russia of working to exploit Libya’s latest clash.

“The United States calls on the ‘Libyan National Army’ to end its offensive on Tripoli,” a joint statement said after a GNA delegation held talks in Washington, referring to Haftar’s self-styled LNA.

The US also “underscored support for Libya’s sovereignty and territorial unity in the face of Russia’s attempts to exploit the conflict against the will of the Libyan people”.

Western powers have sent combined signals, with France and Italy welcoming Haftar for visits and US President Donald Trump earlier this year hailing his role in “fighting terrorism and securing Libya’s oil resources”.

But the US has since distanced itself from the field marshal and joined calls for a ceasefire.