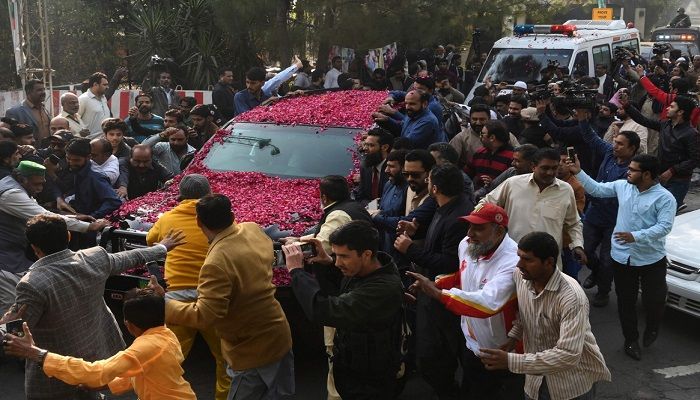 Supporters of Pakistan Muslim League Nawaz (PML-N) gather around a vehicle, covered with rose petals, carrying the ailing former Pakistani prime minister Nawaz Sharif as he travels to Lahore airport prior to his departure for abroad for medical treatment, in Lahore on November 19, 2019. Photo: AFP

﻿Pakistan's ailing ex-prime minister Nawaz Sharif today left by air ambulance for London, where he is due to receive medical treatment after battling the government for permission to travel, his doctor and close aides said.

According to aides, Sharif, 69, is fighting for his life suffering from an autoimmune blood disorder, has high blood pressure, and his kidney functions are deteriorating.

He had been in prison serving a sentence for corruption, but was bailed last month to receive treatment. Since then his party and family have been fighting to get his name removed from a travel stop list to allow him to go abroad for treatment.

The government of Sharif's rival Imran Khan said it would not stand in the way, but last week demanded he pay a bond of seven billion Pakistani rupees ($45 million) as a condition of his travel. The demand was immediately rejected by Sharif's party, the Pakistan Muslim League-Nawaz (PML-N).

The condition was finally lifted after days of political deadlock and Sharif was flown to London via Doha on a Qatar Airways air ambulance.

Party workers showered rose petals on his car as it left his house on the outskirts of the eastern city of Lahore.

Sharif's aides have said the unexplained cause and uncertain diagnosis of his illness require advanced investigations and specialized care.

The courts have granted him four weeks to receive treatment which can be extended pending medical advice.

Known as the "Lion of Punjab", Sharif is a political survivor who has repeatedly roared back to the country's top office. He served three terms -- but did not complete a single one.

Sharif blamed the security establishment for again targeting him in 2017 when the Supreme Court disqualified him from politics for life over graft allegations, which he denies.