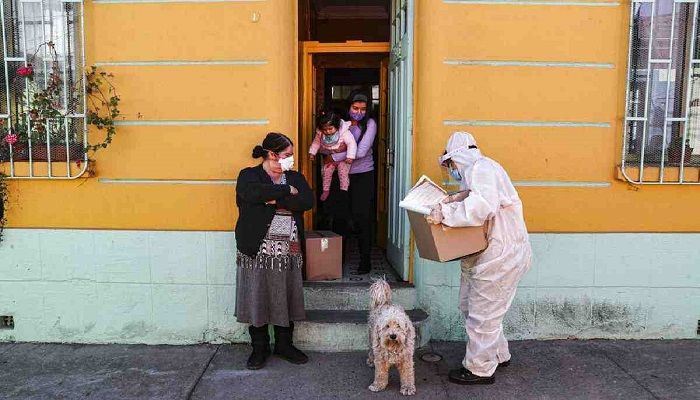 A city worker, dressed in protective gear, delivers a box of food during a mandatory quarantine ordered by the government amid the new coronavirus pandemic in Santiago. Photo: Collected from AP

﻿The highly contagious coronavirus continues to spread across the world as the officially confirmed cases rise to 5,210,065 on Saturday morning, according to Johns Hopkins University.

So far, 338,142 deaths have been attributed to the virus but more than two million people have so far recovered.

Coronavirus, first reported in China in December last year, is a respiratory disease that seems to start with a fever, followed by a dry cough. After a week, it leads to shortness of breath and some patients require hospital treatment.

These symptoms do not necessarily mean you have the illness. They are similar to those for much more common viruses, such as colds and flu.

Brazil, the worst-hit country in Latin America, has the second-highest number of confirmed cases in the world. It has so far reported 330,890 cases.

The UK, on the other hand, has the second-highest death toll in the world with 36,475 confirmed coronavirus deaths.

Among other European countries, Italy, France and Spain are the worst-hit.

No deaths related to the disease were reported on the day either, according to the National Health Commission, adding that it received reports of two new suspected cases.

The outbreak was declared a pandemic by the World Health Organization (WHO) on 11 March. A pandemic is when an infectious disease is passing easily from person to person in many parts of the world at the same time.

Bangladesh’s confirmed coronavirus cases shot past the 30,000-mark on Friday with the detection of 1,694 new cases in the span of 24 hours. During this period, 24 more people died from COVID-19 disease, taking the death tally to 432.