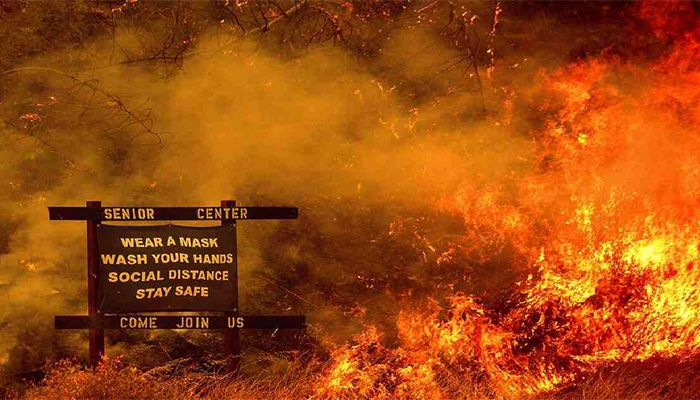 At least five people were killed and more than 30 residents and firefighters were seriously wounded in hundreds of wildfires in northern California.

Sheriff Thomas A. Ferrara confirmed Thursday the death of a citizen of Solano County, in the northeastern San Francisco Bay Area, but he had no more details, reports AP.

In total, more than 30 people and firefighters were wounded.

The flames burned 175 buildings, mostly houses, and are risking 50,000 more, said Daniel Berlant, Deputy Director of the State Department of Forestry and Fire Protection. In all, 33 civilians and firefighters were injured.

At least two people were missing.

Smoke and ash billowing from the fires has fouled the air throughout the scenic central coast and San Francisco.

This was not immediately known if the deaths of Solano and Napa involved a Pacific Gas & Electric service worker who was discovered dead on Wednesday in a car in the Vacaville area of San Francisco and Sacramento.

A pilot on a water-dropping mission in central California also died on Wednesday when his aircraft crashed.

Gov. Gavin Newsom discussed the wildfires, labeling them direct signs of climate change, in a last-minute video filmed for the Democratic National Convention in the forest of Watsonville during a visit to the evacuation center.

Most of the activity is in Northern California, where fires have chewed through about 500 square miles (1,250 square kilometers) of brushland, rural areas, canyon country and dense forest surrounding San Francisco.

More than 10,000 firefighters are on the front lines, but fire officials in charge of each of the major fire complexes say they are strapped for resources. Some firefighters were working 72-hour shifts instead of the usual 24 hours. The state has requested 375 engines and crew from other states.

Cal Fire spokesman Dan Olson said there are concerns that some people are trying to organize through social media to create volunteer brigades and fight the fire themselves.

In Monterey County along the coast, about 9,000 people have been evacuated for a fire that's now 52 square miles (136 square kilometers).

Two fires in Sonoma County triggered evacuation warnings for 8,000 people along the Russian River on Wednesday. People of Healdsburg, with a population of around 12,000, were informed Wednesday night that they would be able to evacuate. Fires in that region destroyed more than 100 buildings, including some homes, and threatened 25,000 people across five counties.

Tim Edwards, union president representing 7,000 Cal Fire workers, said that policymakers ought to spend more funding at a period when workers are going 40 to 50 days at a time without any significant break.

California State Parks announced the full or partial closure of more than two dozen parks, including Big Basin Redwoods in the Santa Cruz Mountains, where the park headquarters and other facilities have been damaged. The park with its giant redwoods of the ancient coast dates back to 1902 and is the oldest in the county.