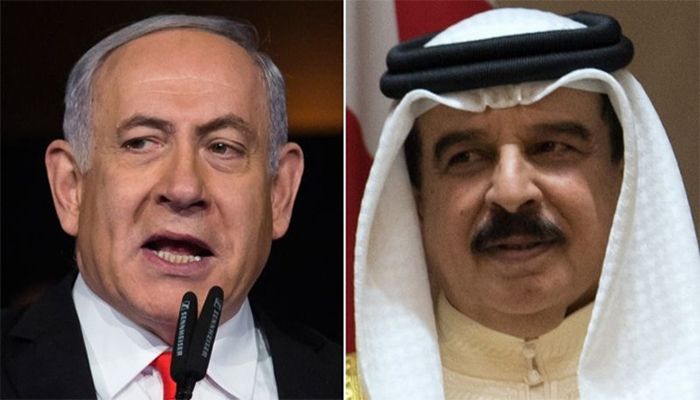 "The second Arab country to make peace with Israel in 30 days," he tweeted.

Most Arab states have boycotted Israel for decades, claiming they can only develop relations after the resolution of the Palestinian dispute.

But the United Arab Emirates ( UAE) decided last month to normalize their relations with Israel.

Mr Trump, who unveiled his Middle East peace plan to settle the Israeli-Palestinian dispute in January, has helped broker both agreements

Bahrain is just the fourth Arab country in the Middle East to accept Israel after its establishment in 1948, after the UAE, Egypt and Jordan.

Israel's Prime Minister Benjamin Netanyahu said he was "excited" that "another peace agreement" had been reached with another Arab country on Friday.

"This is a new era of peace. Peace for peace. Economy for economy. We have invested in peace for many years and now peace will invest in us," he said.

"Another historic breakthrough today!" Mr Trump wrote on Twitter, adding: "Our two GREAT friends Israel and the Kingdom of Bahrain agree to a Peace Deal."

The president also posted a copy of a joint statement on Twitter between the three leaders-Mr Trump, Mr Netanyahu and King Hamad bin Isa bin Salman al-Khalifa of Bahrain.

"This is a historic breakthrough to further peace in the Middle East" that will "increase stability, security, and prosperity in the region", the statement reads.

The UAE welcomed the latest move. The ministry of foreign affairs said it was "another significant and historic achievement which will contribute enormously to the stability and prosperity of the region".

However, there was an angry response from Palestinian officials.

The Palestinian foreign ministry recalled its ambassador to Bahrain for consultation and a statement from the Palestinian leadership spoke of the "great harm it causes to the inalienable national rights of the Palestinian people and joint Arab action".

For a long time, the Palestinians depended on a single Arab response to Israeli withdrawal from the occupied territories and recognition of a Palestinian State.

Hamas, the militant Islamist group that controls Gaza, said the move "represents grave harm to the Palestinian cause".

Hossein Amir-Abdollahian, a special advisor for the speaker of Iran's parliament on foreign affairs, said that it was a betrayal of the Palestinian cause, Reuters reports.

In these diplomatic moves there is a backdrop to the regional rivalry between Saudi Arabia and Iran.

Religious differences worsen the decades-old Rivalry between them. They each follow one of Islam's two main branches-Iran is predominantly Shia Muslim, while Saudi Arabia sees itself as the Sunni Muslim leading force.

The UAE and Bahrain-both Saudi allies-expressed reservations about Iran with Israel, leading to inofficial contacts.

The response from Saudi Arabia is to be closely monitored. There is no sign yet that Bahrain and the UAE are able to proceed.

Before the announcement in August of the UAE agreement-which included the suspension of the contentious attempts of Israel to annex parts of the occupied West Bank-Israel had no diplomatic relations with the Arab Gulf countries.

Last month saw the first official flight from Israel to the UAE, which was seen as a major step in normalising relations.

President Trump's son-in-law and senior adviser Jared Kushner, who was on the plane, described the UAE deal as having "the ability to change the whole course of the Middle East".

Bahrain last week said it would allow flights between Israel and the UAE to use its airspace.

Mr Trump is due to hold a ceremony for the formal signing of an Israeli-UAE deal at the White House in Washington next Tuesday.

In 1999, a member of the Arab League in North-West Africa, Mauritania formed diplomatic relations with Israel-but in 2010, they severed links.