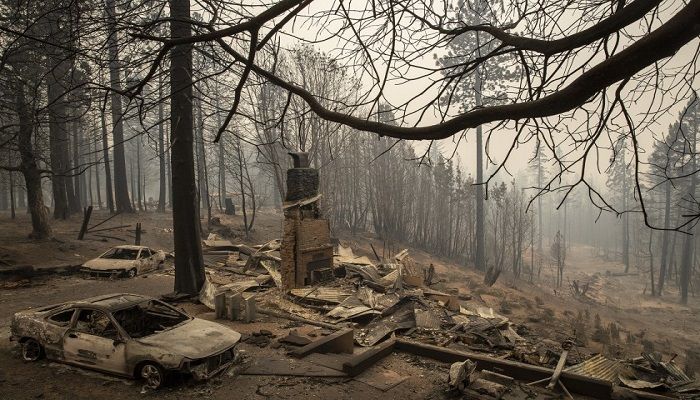 The ruins of a home in Brush Creek in Butte County smolder Thursday. Photo: Collected

﻿A record-shattering rash of wildfires is continuing to take a devastating and deadly toll on California, even as crews report some progress in their battle against the largest firestorm in modern state history.

The collective scale of the infernos that have scarred the state over the last month is staggering: at least 19 fatalities, tens of thousands of structures destroyed and more than 3.1 million acres burned — the most recorded in a single year and all but 500,000 acres since August 16.

The loss has been most profound from the North Complex fire near Oroville in Butte County, which is now blamed for nine deaths, placing it among the deadliest wildfires in state history, according to the California Department of Forestry and Fire Protection.

Among those killed were 16-year-old Josiah Williams and 77-year-old Millicent Catarancuic. Officials said Williams was believed to have been attempting to evacuate in his own vehicle and that Catarancuic had been aware of the fire but chose to stay.

An additional 19 people have been reported missing in the area of the fire, which has burned more than 252,000 acres and was 21% contained as of Friday night.

Steve Kaufmann, a spokesman for the fire’s response team, said Thursday that 2,000 structures have been destroyed or damaged, though that number may increase after crews further assess the area.

Propane gas burns at a home on Zink Rd. destroyed in the North Complex fire on Friday in Berry.

Officials also saw further growth in the monstrous August Complex fire, already the largest in state history. That blaze has now scorched more than 491,000 acres in a remote area in and around Tehama County.

Abutting it to the north is the Elkhorn fire, burning in the Mendocino, Shasta-Trinity and Six Rivers national forests. It has charred 255,309 acres.

The scope of this year's fire season has been both historic and horrifying. Six of the state’s 20 largest wildfires have started in the last month or so, according to Cal Fire.

Within the last week, front-line firefighters have had to contend with a record-breaking heatwave and howling winds — a noxious combination that fueled explosive fire growth statewide.

Many officials and experts believe such extreme weather conditions are the result of climate change.