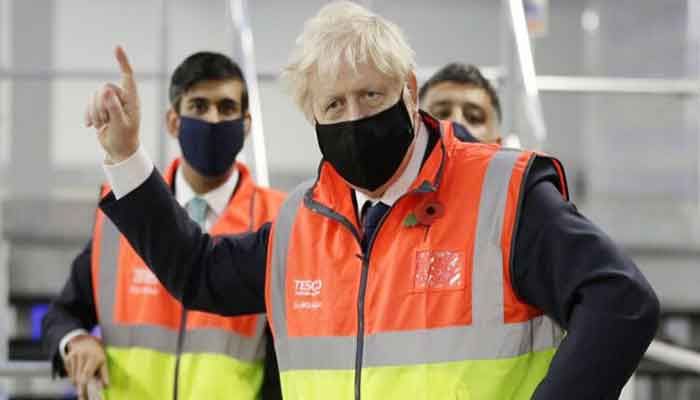 ﻿UK Prime Minister Boris Johnson is self-isolating after meeting a member of Parliament who was subsequently tested positive for Covid-19.

The Prime Minister said he was contacted by the SNS Test and Trace on Sunday, but he doesn't show any signs, BBC reports.

Mr Johnson spent about 35 minutes on Thursday with Ashfield MP Lee Anderson, who has been tested positive since then.

The news came as No 10 said Mr Johnson would make "critical announcements" about coronavirus and "levelling up" the UK over the coming weeks.

In an announcement planned before Mr Johnson was told to self-isolate, Downing Street said there would be a "clear signal" of his "ongoing ambitions for the United Kingdom".

It said that Mr Johnson will chair "Key Covid Meetings" and work with Chancellor Rishi Sunak on the next spending review with a view to fulfilling his "Build back better" pledge.

But the initiative of No. 10 to start the week again after the departure of two of Mr. Johnson's top aides in the internal power struggle was overshadowed by the news that the prime minister was self-isolating.

Mr Johnson wrote on Twitter on Sunday night: "Today I was notified by NHS Test and Trace that I must self-isolate as I have been in contact with someone who tested positive for COVID-19.

"I have no symptoms, but am following the rules and will be working from No 10 as I continue to lead the government's pandemic response."

A No 10 spokesman added: "The PM is well and does not have any symptoms of Covid-19."

The PM added in a WhatsApp post to Tory MPs seen by the BBC: "The good news is that NHS Test and Trace continues to progress. The bad news is that I was pinged!"

He said that despite "following the guidance and socially distancing" during his meeting with Mr Anderson, he would uphold self-isolation laws.

"It doesn't matter that I feel fine - better than ever - or that my body is bursting with antibodies because I have already had the damn thing," he added.

"The rules are the rules and they are there to stop the spread of the disease."

In April, Mr Johnson spent three nights in intensive care after falling ill with the virus.

He later said it "could have gone either way" and thanked healthcare workers for saving his life.

Leader of the House of Commons, Jacob Rees-Mogg, said on Sunday night that he was urgently investigating ways to support additional virtual involvement" in the Chamber following a campaign by vulnerable members of parliament.

Such a step could make it possible for more Participants, including Mr Johnson, to attend the debates of the Commons remotely and perhaps even Prime Minister's Questions as he distinguishes himself.

On Thursday, Conservative MP Mr Anderson posted a photo of himself with Mr Johnson at No 10 alongside the words: "Breakfast with the PM."

Mr Anderson posted on his Facebook page to say he was self-isolating with his wife, who is clinically vulnerable.

"On Friday I lost my sense of taste at the same time my wife had a bad headache," he said. "I had no cough, no fever and felt well. We both had a test on Saturday and the result came in Sunday morning.

"My wife and I both tested positive. I feel absolutely fine and my biggest concern is my wife who is in the shielded group.

"But we are both feeling good."

BBC political editor Laura Kuenssberg tweeted that the news had come the night before what was supposed to be a "Major Relaunching Week," following last week's row involving PM Chief Advisor Dominic Cummings.

Another Conservative MP, Sir Charles Walker, said the changes were a sign of Mr Johnson's "determination to rebuild relationships".

A meeting between the PM and the Northern Research Group of backbench Tory MPs had been scheduled for Monday.

Officials also confirmed the government's 10-point plan for a "green industrial revolution" would be published "to boost green jobs whilst invigorating plans to achieve net zero by 2050".

Elements already planned include a new investment of £40m in green spaces across England and £160m for the wind turbine industry.

In addition, another week of talks on a post-Brexit trade agreement with the EU is expected to begin in Brussels.

The transitional phase, which followed the brebis in January, ends on 31 December, during which time an agreement must be reached and accepted by the Parliaments of the United Kingdom and the EU.

UK chief negotiator David Frost said that some progress had been made between the two sides, but that significant gaps existed.

The UK government announced another 24,962 confirmed Covid cases on Sunday, as well as a further 168 deaths within 28 days of a positive test.