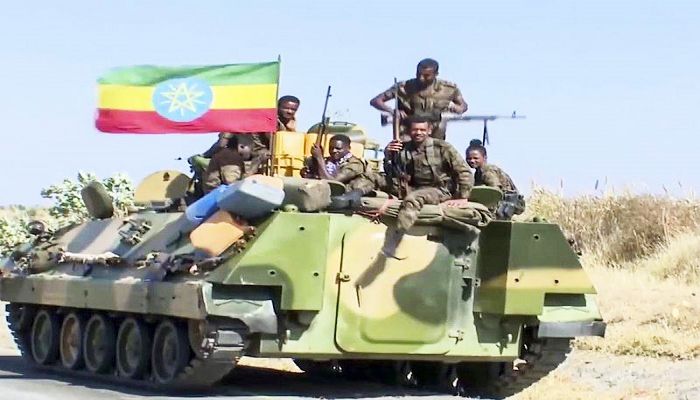 ﻿Ethiopia's prime minister has said that his army is advancing on the capital of the northern region of Tigray where soldiers from the region are fighting the central government.

The government accused Tigray's forces of destroying bridges near the city of Mekelle to halt the advance, reports BBC.

Tigray's leader confirmed his soldiers had lost territory but said it was a temporary setback.

Hundreds of people have reportedly died in nearly two weeks of clashes.

Verifying information from Tigray is hard due to a blackout on most communications.

Ethiopian Prime Minister Abiy Ahmed suggested on Tuesday that the fighting was coming to an end, saying "the final critical act of law enforcement will be done in the coming days".

The conflict is rooted in long-standing tension between the powerful Tigrayan party the Tigray People's Liberation Front (TPLF) and Ethiopia's central government.

When Mr Abiy postponed a national election due to coronavirus in June, tension escalated between the two groups. The TPLF sees the central government as illegitimate, arguing Mr Abiy no longer has a mandate to lead the country.

The government accused the TLPF of attacking a military base to steal weapons, which the TPLF denied. In response, Mr Abiy ordered a military offensive, accusing the TPLF of treason.

Government forces advanced on Mekelle as well as the towns of Shire and Axum as a three-day deadline given by Prime Minister Abiy to Tigray's forces to surrender expired on Tuesday.

TPLF leader Debretsion Gebremichael confirmed to a local TV station on Wednesday that central government troops had taken control of Shire and Axum, but called it a "temporary success" for the government and vowed to defeat Mr Abiy's forces.

The government has accused Tigrayan soldiers of destroying four bridges and a section of a road near Shire and Axum. The TPLF have not commented on the accusations.

At least 27,000 people have fled over the northern border to Sudan as the UN warned a "full-scale humanitarian crisis" was unfolding.

TPLF adviser Fesseha Tessema, a former Ethiopian diplomat, told the BBC that civilian sites in Mekelle were being bombed by federal forces.

"[The people of Tigray] haven't done anything wrong, they are in their own homes, churches," Mr Fesseha said.

The federal government has denied targeting civilians and said that air attacks are aimed at the Tigrayan military.

Mr Abiy suggested that a number of TLPF fighters had switched sides to the government but he did not say how many.

He added that his government was "ready to receive and reintegrate our fellow Ethiopians fleeing to neighbouring countries".

How bad is the humanitarian crisis?

The UN's refugee agency, the UNHCR, has said that thousands of people have been fleeing the fighting.

The agency was "on standby to provide assistance in Tigray when access and security allow" spokesman Babar Baloch said.

"There may be massive displacement inside Tigray and that is, of course, a concern and we try to prepare the best way possible," Jens Laerke, spokesman of the UN Office for the Coordination of Humanitarian Affairs (OCHA), said.

The UN fears the numbers fleeing Ethiopia maybe just a fraction of those forced from their homes by the fighting, but for the moment aid agencies have no access to the Tigray region.

Regional powers Kenya and Uganda have called for negotiations to find a peaceful resolution to the conflict.

The Ethiopian government has, however, ruled out talks with the TPLF.