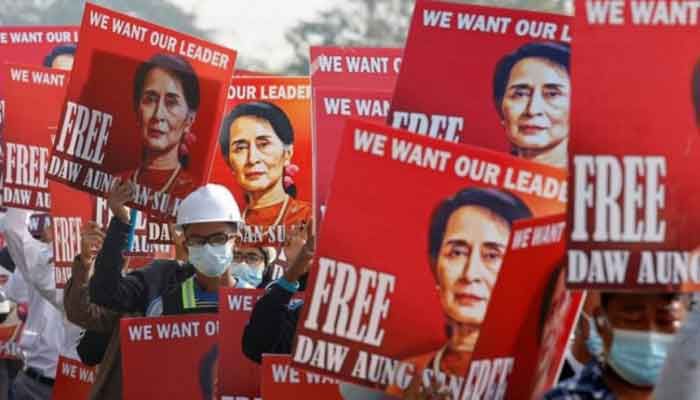 ﻿Russia said on Tuesday the West risked triggering civil war in Myanmar by imposing sanctions on the military junta that has seized power in a coup, but France said the European Union will step up restrictions on the generals.

The Kremlin's show of support was a boost to the junta that overthrew Aun San Suu Kyi's elected civilian government on February 1. But it still faces a sustained campaign of pro-democracy demonstrations and civil disobedience across the country, and condemnation and more sanctions from the West, reports Reuters.

In Myanmar's main city Yangon on Tuesday, protesters sprayed red paint on roads, symbolising the blood shed in a crackdown by the security forces.

"The blood has not dried," said one message in red.

About 570 people, including dozens of children, have been shot dead by troops and police in almost daily unrest since the coup, and security forces have arrested close to 3,500 people, advocacy group the Association for Political Prisoners (AAPP) said.

Among those detained are Suu Kyi, Myanmar's most popular politician, and members of her National League for Democracy, which trounced military-backed candidates in a November election.

However, Russia said on Tuesday that sanctions against the authorities were futile and extremely dangerous.

"In fact, such a line contributes to pitting the sides against each other and, ultimately, pushes the people of Myanmar towards a full-scale civil conflict," the Russian Foreign Ministry said, quoted by the Interfax news agency.

"We are going to add economic sanctions at the level of the 27 (EU countries)...against the economic entities linked to the army so that they (sanctions) can be applied very quickly," Le Drian told lawmakers.

The EU last month imposed sanctions on a number of figures linked to the coup and the subsequent repression, while the United States has also taken measures against individuals and military-run businesses, which cover a wide span of Myanmar's economic life.

A protest scheduled for Wednesday has called for the burning of Chinese-made goods. Many protesters are opposed to China, a major investor in Myanmar, because it is seen as supporting the junta.

Anger has swept Myanmar in the past two months over the coup that brought an abrupt end to a brief era of democratic and economic reform and international integration that followed the military's oppressive 1962-2011 rule.

Suu Kyi and her party had pledged to change the constitution to reduce the military's political clout.

The junta says it acted because the November election was fraudulent - an assertion dismissed by the election commission and international observers - and says it will hold a new election.

Western countries have backed the protesters' calls for Suu Kyi and her government to be reinstated.

The ability to organise protests has been hampered by the military's restriction of broadband wireless internet and mobile data services that had been the main channel for spreading word of what was happening in the country.

Those able to access social media on Tuesday shared pictures of striking workers marching for a second day in the city of Mandalay, some wearing gas masks and giving the three-finger salute that has become a symbol of resistance to army rule.

Authorities have issued arrest warrants for dozens of celebrities, models and influencers, and on Tuesday a popular comedian was arrested in Yangon, the Mizzima news site reported.

Sithu Aung Myint, a prominent journalist, was on the wanted list. Writing on Facebook, he said he was proud to be considered a threat.

"When the coup council who have been committing crimes announces you as a lawbreaker together with the whole country, you will be more than happy because you are recognised as a hero in this revolution," he wrote.

"Your next generation will be proud of you."