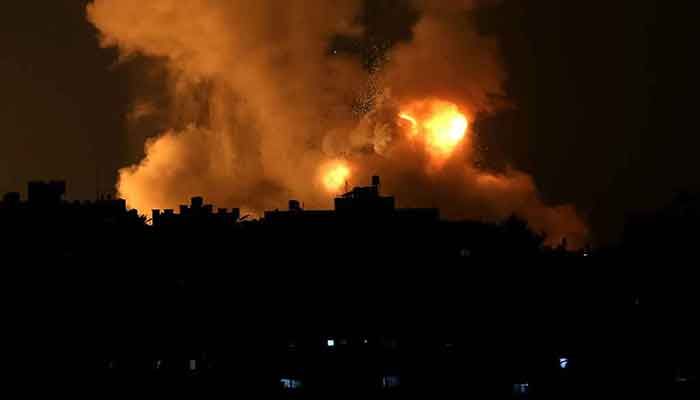 Israel launched deadly air strikes on Gaza Monday in response to a barrage of rockets fired by Hamas and other Palestinian militants, amid spiralling violence sparked by unrest at Jerusalem's Al-Aqsa Mosque compound, reports AFP.

At least 20 people were killed, including nine children and a senior Hamas commander, and 65 others wounded, Gaza authorities said.

Israeli Prime Minister Benjamin Netanyahu warned that Hamas had crossed a "red line" by directing missiles towards Jerusalem and that the Jewish state would "respond with force."

"We will not tolerate attacks on our territory, our capital, our citizens and our soldiers. Those who attack us will pay a heavy price," said Netanyahu, who held meetings with the heads of the army and the Shin Bet security agency.

Israel's army said 150 rockets had been launched from Gaza, dozens of which were intercepted by the Iron Dome Aerial Defense System, with no casualties reported.

"We have started, and I repeat started, to attack military targets in Gaza," army spokesman Jonathan Conricus said.

"We have made preparations for various scenarios, including high intensity ones... Hamas will get the message."

The military said it had targeted "two rocket launchers, two military posts," a tunnel and eight Hamas operatives in Gaza.

Hamas sources confirmed to AFP that one of their commanders, Mohammed Fayyad, had been killed.

Tensions in Jerusalem have flared since Israeli riot police clashed with Palestinian worshippers on the last Friday of the Muslim holy fasting month of Ramadan in the city's worst disturbances since 2017.

Nightly unrest since then at the Al-Aqsa compound has left hundreds of Palestinians wounded, drawing international calls for de-escalation and sharp rebukes from across the Muslim world.

Diplomatic sources told AFP that Egypt and Qatar, who have mediated past Israeli-Hamas conflicts, were attempting to calm tensions.

US Secretary of State Antony Blinken strongly condemned the rocket attacks by Hamas, saying they "need to stop immediately."

"All sides need to de-escalate, reduce tensions, take practical steps to calm things down," he said.

Adding to the sense of chaos, a huge fire engulfed trees in the compound that houses the mosque, Islam's third holiest site, as hundreds of Jewish Israelis watched from the Western Wall esplanade below.

Hamas, which controls the Gaza Strip, earlier Monday warned Israel to withdraw all its forces from the mosque compound and the east Jerusalem district of Sheikh Jarrah, where looming evictions of Palestinian families have fuelled angry protests.

Sirens wailed across Jerusalem just after the 1500 GMT deadline set by Hamas as people in Jerusalem, including lawmakers in the Knesset legislature, fled to bunkers for the first time since a 2014 Gaza conflict.

A spokesman for Hamas' armed wing the Qassam Brigades said the rocket attacks were in response to Israeli actions in Sheikh Jarrah and around the Al-Aqsa mosque.

"This is a message that the enemy must understand well: if you respond we will respond, and if you escalate we will escalate."

The Israeli army said on Twitter that, separate to the rockets, "as a result of an anti-tank missile fired from Gaza, an Israeli civilian in a nearby vehicle was lightly injured" in the Gaza border area.

Fears of further chaos in the Old City had temporarily eased when Israeli organizers of a march to celebrate the Jewish state's 1967 capture of east Jerusalem cancelled the event.

But then came the Hamas warning, followed by the rockets, which also forced the evacuation of the Western Wall and other sites.

Militants in Gaza have recently also deployed incendiary balloons that have sparked dozens of fires in Israeli territory.

On Monday evening, as during the previous nights since Friday, Palestinians hurled rocks at Israeli officers in riot gear who fired rubber bullets, stun grenades and tear gas.

That came after morning clashes which left the ground littered with rocks, stun grenade fragments and other debris as loud booms and angry screams echoed from the ancient stone walls.

There were dozens of newly wounded demonstrators. The Palestinian Red Crescent said at least 395 Palestinians were wounded, including more than 200 who were hospitalized, five of them in critical condition.

Siraj, 24, was wheeled into surgery at the large Makassed Hospital after suffering a spleen injury from being hit by a rubber bullet.

"They shot everyone, young and old people," he said.

Makassed Director General Adnan Farhoud said most of Monday's injuries were to the head, chest, and upper and lower limbs.

When "you mean to harm someone you shoot to the head," he told AFP.

The Israeli police reported 32 injuries in their ranks.

The violence since Friday has been fuelled by a long-running bid by Jewish settlers to evict several Palestinian families from their nearby Sheikh Jarrah neighbourhood.

A Supreme Court hearing on a Palestinian appeal in the case originally set for Monday was pushed back by the justice ministry due to the tensions.