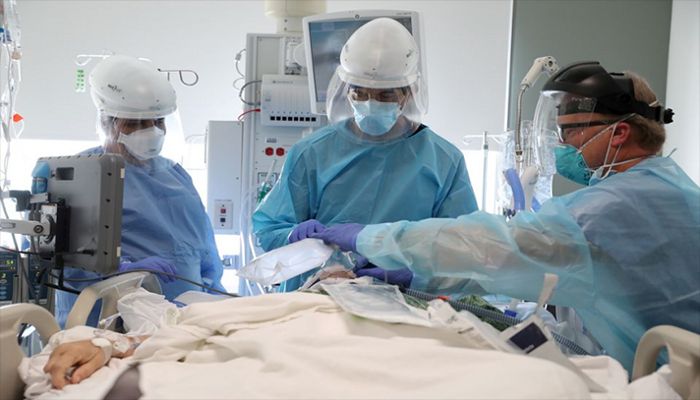 The overall number of global Covid cases is fast nearing 222 million, as the world is still struggling to contain the second wave of the pandemic even with mass inoculations underway.

India's Covid-19 tally rose to 33,058,843 on Tuesday, and 31,222 new cases were registered during the past 24 hours across the country, as per the federal health ministry's latest data.

Besides, as many as 290 deaths due to the pandemic since Monday morning took the total death toll to 441,042.

Bangladesh logged 56 Covid-19 deaths and 2,639 cases in 24 hours till Tuesday morning, showing a decline in single-day fatalities and cases as compared to Monday's figures.

The country reported 65 Covid-related deaths and 2,710 cases on Monday.

The daily case positivity rate also fell slightly to 9.69 per cent from Monday's 9.88 per cent, according to the Directorate General of Health Services (DGHS).

The new cases were detected after testing 27,466 samples during the 24-hour period.

The country last saw 54 coronavirus-related deaths on June 18 and the upswing in the fatalities reached its peak on August 5 and 10 when 264 deaths were recorded.

However, the situation was much more catastrophic than June and the latter part of August as the country experienced a surge in Covid-related cases and deaths during that time.

The government on Tuesday started administering the second doses of Covid-19 vaccine under its mass vaccination campaign, aiming to fight the deadly virus.

Vaccination centres in Dhaka and elsewhere in the country drew huge crowds as vaccine seekers were seen standing close to each other with little or no regard for social distancing rules.

Bangladesh on August 7 kicked off another phase of its mass vaccination drive aimed at inoculating 35 lakh people in six days.