EU Scales Up Assistance for Fire Victims in Cox’s Bazar 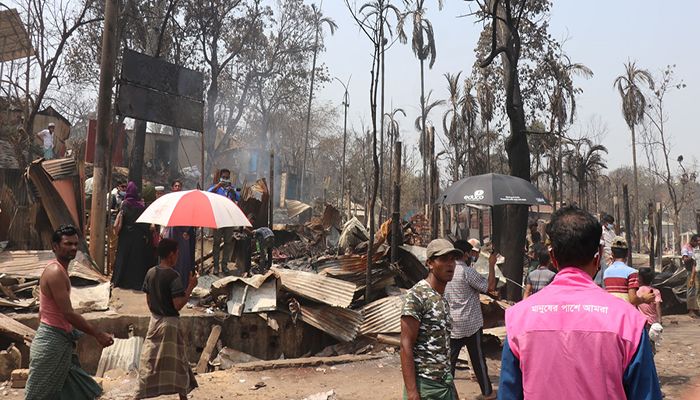 ﻿The European Union has scaled up its support providing an additional €150,000 for the Rohingyas affected by the massive fire that swept through Rohingya camps in Cox’s Bazar earlier this month.

This follows the initial assistance of €500,000 announced last week as an immediate response to the blaze.

The aid will directly benefit 27,500 of the most affected people.

''The fire has caused many Rohingya refugees, who have lived in displacement in camps over the past three years, to yet again lose almost everything,'' said Daniela D'Urso who oversees the EU’s humanitarian response in Bangladesh.

''The additional funding from the European Union will ensure our partners on the ground are able to provide essential assistance to those most in need.''

This EU funding supports the Bangladesh Red Crescent Society (BDRCS) in delivering much-needed assistance through the distribution of ready-to-eat food packs, hygiene kits and water buckets, to ensure the daily needs of the affected refugees are met during displacement.

The funding is part of the EU’s overall contribution to the Disaster Relief Emergency Fund (DREF) of the International Federation of Red Cross and Red Crescent Societies (IFRC), said the EU Embassy in Dhaka on Thursday.

More than 10 people were killed and nearly 50,000  were affected, including injured and missing refugees, after a huge fire broke out on 22 March in Cox’s Bazar’s crowded Rohingya camp settlements.

Following the blaze, a number of facilities, including more than 10,000 homes, hospitals, learning centers, mosques and distribution points, have subsequently been destroyed or heavily damaged.

The European Union together with its Member States is the world's leading donor of humanitarian aid.

Relief assistance is an expression of European solidarity towards people in need around the world.

It aims to save lives, prevent and alleviate human suffering, and safeguard the integrity and human dignity of populations affected by natural disasters and man-made crises.

Through its European Civil Protection and Humanitarian Aid Operations (ECHO), the European Union helps over 120 million victims of conflicts and disasters every year. For more information, please visit ECHO's website.

The Disaster Relief Emergency Fund was established in 1985 and is supported by contributions from donors. Each time a National Red Cross or Red Crescent Society needs immediate financial support to respond to a disaster, it can request funds from the DREF.