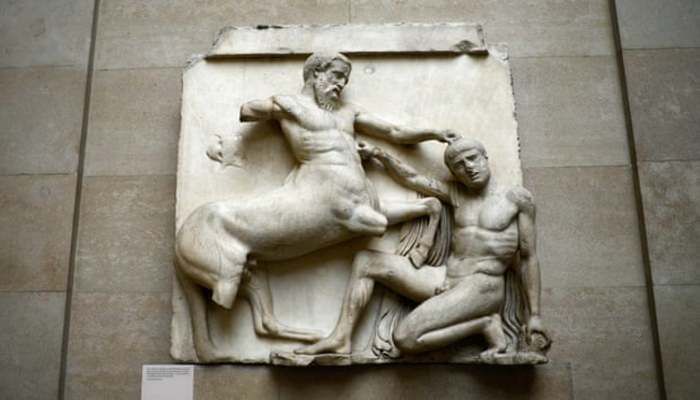 ﻿The British Museum has been accused of exhibiting “pilfered cultural property”, by a leading human rights lawyer who is calling for European and US institutions to return treasures taken from “subjugated peoples” by “conquerors or colonial masters”.

Geoffrey Robertson QC said: “The trustees of the British Museum have become the world’s largest receivers of stolen property, and the great majority of their loot is not even on public display.”

He criticised the museum for allowing an unofficial “stolen goods tour”, “which stops at the Elgin marbles, Hoa Hakananai’a, the Benin bronzes and other pilfered cultural property”. The three items he mentioned are wanted by Greece, Easter Island and Nigeria respectively.

“That these rebel itineraries are allowed is a tribute to the tolerance of this great institution, which would be even greater if it washed its hands of the blood and returned Elgin’s loot,” Robertson said.

He accused the museum of telling “a string of carefully-constructed lies and half- truths” about how the marbles “were ‘saved’ or ‘salvaged’ or ‘rescued’ by Lord Elgin, who came into possession of them lawfully.”

He criticised “encyclopaedic museums” such as the British Museum, the Louvre in Paris and the Metropolitan in New York that “lock up the precious legacy of other lands, stolen from their people by wars of aggression, theft and duplicity”.

Robertson’s views appear in his book, Who Owns History? Elgin’s Loot and the Case for Returning Plundered Treasure. He writes: “This is a time for humility – something the British, still yearning for the era when they ruled the world, ie for Brexit, do not do very well. Before it releases any of its share of other people’s cultural heritage, the British Museum could mount an exhibition – ‘The Spoils of Empire’.” Others argue that the empire also brought benefits, including education and legislation.

Advocating the return of cultural property based on human rights law principles, Robertson observes that the French president, Emmanuel Macron has “galvanised the debate” by declaring that “African cultural heritage can no longer remain a prisoner of European museums”.

“Politicians may make more or less sincere apologies for the crimes of their former empires, but the only way now available to redress them is to return the spoils of the rape of Egypt and China and the destruction of African and Asian and South American societies,” he writes.

“We cannot right historical wrongs – but we can no longer, without shame, profit from them.”

Robertson prepared a report on the reunification of the Elgin marbles for the Greek government with Amal Clooney and the late Professor Norman Palmer. In his new book, he acknowledges that restitution might well encourage further claims, “although – because the Marbles are unique – not necessarily successful ones”.

He writes: “The Benin bronzes, for example, are art which is important to Africa, but not to the world in the way that the marbles have international resonance. On the other hand, the barbaric manner of the taking of the bronzes amounted to a war crime, which is morally more despicable than Elgin’s theft and duplicity.”

He accuses museum trustees and the government of passing the buck when it comes to answering requests for the return of cultural property. He also criticises the lack of diversity among trustees.

Julian Spalding, the former head of Glasgow, Sheffield and Manchester museums, agreed that the British Museum should give the Elgin marbles back “because they’re an intrinsic part of one the world’s greatest works of art”.

A British Museum spokeswoman confirmed that it allows a “stolen goods tour”, run by an external guide. She said the Elgin marbles were acquired legally, with the approval of the Ottoman authorities of the day.

“They were not acquired as a result of conflict or violence. Lord Elgin’s activities were thoroughly investigated by a parliamentary select committee in 1816 and found to be entirely legal,” she said.

“The British Museum acknowledges the difficult histories of some of its collections, including the contested means by which some collections have been acquired such as through military action and subsequent looting … In the case of the Benin bronzes, the museum visited Benin City in 2018 to talk about plans for a new Royal Museum in Benin City and how the museum could help.”