GDP Didn’t Save Countries From COVID-19

The pandemic’s impact shows growth is an arbitrary target. 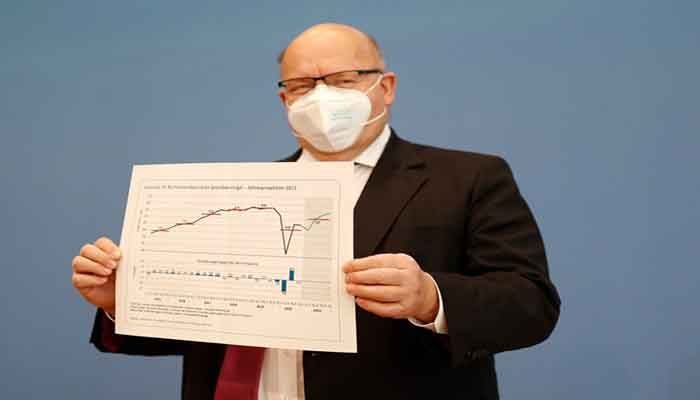 German Economy Minister Peter Altmaier holds a paper with a graph of German GDP in Berlin on Jan. 27. Photo: AFP

﻿The terrifyingly global progression of COVID-19 over the past year should shake long-held assumptions about the benefits of wealth and industrial-technological development. Estimations of which countries were best prepared for a pandemic display those prejudices in full: The 2019 Global Health Security Index, jointly produced by the Johns Hopkins Center for Health Security and the Nuclear Threat Initiative, ranked the United States at the top, with the United Kingdom immediately behind it, then the Netherlands, and Sweden only a few rows down; New Zealand comes in at number 35; and Africa is blocked in red. A Washington Post report on the index when it was released expresses patronizing surprise that a “number of middle- and low-income countries scored higher than some wealthy countries.”

Contrasting those assessments with reality shows just how inaccurate they were. A map of COVID-19 deaths per hundred thousand people shows almost the opposite of the preparedness map: The United States, the U.K., and most of Europe are dark with total deaths, while most of Africa and Asia has had far fewer.

Certainly, a few wealthy countries, such as New Zealand, have done well at containing the pandemic. But so have places like the Dharavi slum in Mumbai, one of the densest and poorest places in the world. And while Africa is facing a second wave—and the reluctance of wealthy countries to share vaccines and the technology to build them—numbers from the continent are still far better than those of the United States or U.K. While there are a number of different theories to explain this success—including leadership, civil society, experience with epidemics, demographics, and successfully implementing the policies recommended by the World Health Organization and the U.S. Centers for Disease Control and Prevention—none of them include buying their way out of it.

National wealth and power, combined with the lingering soft power of colonialist philosophies that painted nonindustrialized places as inferior, heavily influences the way we perceive governments and countries. But those qualities did not protect people from COVID-19. Living in a wealthy country also does not insulate people from the impacts of hurricanes or unusual temperatures, poorly built firetrap apartments, or toxic tap water.

GDP is a useful measurement, but it’s not the only one. So why does the international community still hold up a narrow form of economic growth as the goal toward which all countries should be working, even at the expense of planetary viability and human rights?

The world needs a new approach.

I am not suggesting that success at preventing COVID-19’s spread should be the only measurement for whether a nation is doing well. China has done a fairly good job of containing the virus since the initial outbreak, but its abuse of Uyghurs, to take just one example, disqualifies it from serving as an example of governance goals.

But the failures during the pandemic have highlighted what even economists have been telling us for some time now: The current measurements for what makes a country successful are inaccurate. GDP or economic growth rates are not a useful proxy for good governance or good quality of life. Sometimes they are, if anything, inimical to it.

Current development efforts, whether international or domestic, almost always set out to mimic, explicitly or implicitly, the status of rich countries. Instead, they replicate patterns of environmental damage and growing inequality, with the promise of wealth and ease, safety and prestige, glowing always ahead like a Hollywood-powered mirage.

That supposed success story isn’t possible for every country; remote islands where transport and information costs are high, for example, are unlikely to benefit from trade and industrialization. It may even be impossible for any country at this point in history: The rules have changed since the last few developmental leaps—most of them powered by the Marshall Plan or similarly vast inputs of foreign aid or by cheap oil—and those in power will keep tilting the playing field to keep others from challenging their status.

But the more important question is not even whether this goal is possible but whether it’s desirable. Does the world need more national economies structured around extractive service industries like tourism and gambling or based on manufacturing, where the competitive advantage is entirely based on the willingness to exploit people and natural resources? Do it need more cities where financial, real estate, and labor structures amplify inequality and legitimize wealth year after year?

The promise has been that economic growth will trickle down and permeate, leading to better policies and a burgeoning middle class (for some reason, middle classes always burgeon), and that quality of life will improve for all. But we’ve seen that such claims don’t work in so-called developed countries, and to the extent that rising GDPs associated with exploitative industries are beneficial, they also come at a dire human and environmental cost. And apparently, they do not leave national governments enough budget or political will to protect their citizens from disasters, whether naturally triggered or byproducts of the very industrial processes that are supposed to bring wealth.

To be clear, I think everyone should have access to clean water, excellent education, modern health care, leisure time, and disposable income. I think wealthy countries should be offering more assistance to poor countries than they currently do, and middle-income countries should be dedicating resources to reduce poverty. But macroeconomic growth is not the only way to get there—it may not, in fact, get us there at all.

The international community needs to change the metrics it is using and, most of all, its vision of what success looks like.

The international community needs to change the metrics it is using and, most of all, its vision of what success looks like. And while wealthy and therefore influential people are likely to continue pushing the idea that wealth is the most important criteria for, well, anything, instituting new measurements for governance can begin to chip away at that assumption and promote different behaviors.

There are some models for how we might change. We could focus on inequality instead of growth. The degrowth movement prioritizes social and environmental well-being over economic indicators. We could refocus on governance, measuring transparency, accountability, responsiveness, human rights, perhaps taking some hints from the Accountability Lab’s programs to promote integrity among public servants. (Full disclosure: The lab’s founder is a friend, and I have a standing donation there.) We could build in environmental stewardship. We could look directly at happiness, livability, and satisfaction indexes. True, these informal measurements don’t have the accreted academic rigor, or legitimacy, of economic indicators. But that can be built up. And at least such benchmarks might start to point us in the right direction.

*The writer is an affiliated research fellow at the Center for the Sociology of Organizations at Sciences Po. She is the author of an acclaimed trilogy of science fiction political thrillers, beginning with Infomocracy, and a new collection of of short fiction and poetry, ...and Other Disasters.