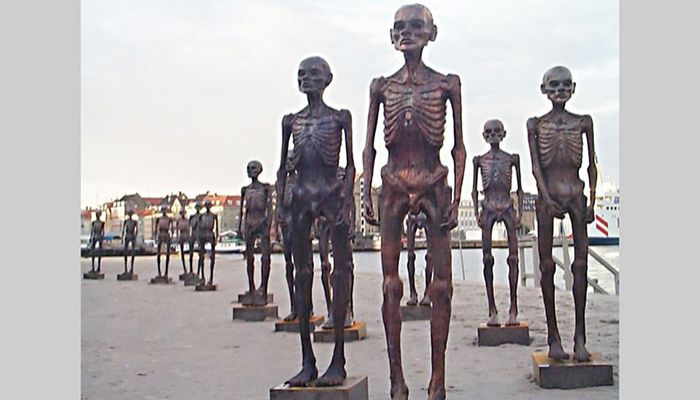 RUSSIA is a breadbasket of the world. It is the globe’s third biggest wheat exporter, way ahead of Ukraine, the eighth, and the world’s biggest fertiliser exporter — a product the US, unlike those poor chumps in Europe, made sure to exempt from sanctions and to continue to import from Russia to the tune of over one billion dollars. But western sanctions on Moscow mean no maritime insurance and that ports won’t accept Russian ships; thus sanctions mean many ships that carry wheat and fertiliser to places that desperately need them, like North Africa, can’t sail. So does the fact that Ukraine mined all its Black Sea harbours. Turkish foreign minister Mevlut Cavusoglu confirmed this: ‘The withdrawal of grain ships from Ukrainian ports is hindered by Ukrainian mines. There is no Russian blockade.’

And then there’s the Scylla and Charybdis facing Global South leaders: violate western sanctions, somehow import Russian wheat and get clobbered financially and politically by the US and EU or don’t import and let the people starve. In fact, this exact, awful choice smacked 14 countries in the face in mid-May. That’s when the US claimed that Russian ships with ‘stolen Ukrainian grain’ had sailed.  Washington announced this to mostly African nations. What were those African leaders supposed to do? Vainly try to refute the claim or refuse the wheat and let people die slow, agonising deaths from hunger? Meanwhile, western propaganda, aka the mainstream media, shrieks with hysterical pugnacity about Russia using food as a weapon of war. Quite a racket Washington has going, based on lies, coercion and extortion; a horrible counterpoint to the needless slaughter of Ukrainian troops — needless, because Kiev’s patron, the US, could speed the end of this promiscuous death by promoting peace negotiations. Biden refuses to do this. Despite his recent murmurings about a negotiated settlement, one doesn’t get the feeling Biden has yet put any oomph into it.

Russia, like the US before it in Iraq in 2003, started a ghastly war. But Moscow was most surely, most deliberately provoked by NATO and the US — unlike the US’s many wars of choice in this century. Any equivalence to Moscow’s invasion, despite western hocus pocus about Russia expanding its quondam empire, is astonishing hogwash. However dreadful Russia’s war in Ukraine, what the US did in Iraq was worse. How did Baghdad provoke Washington in 2003? Did it array troops on the border of North Dakota and dispatch battleships to the Gulf of Mexico? Did it threaten to ally with Mexico and reconquer Texas? Did it support over eight years a Mexican slaughter of 14,000 residents of the Dallas-Fort Worth metro area, as Ukraine did to the citizens of the Donbas? No. Iraq was thousands of miles away from the US and posed zero threat to this country, as Washington’s mendacious rulers knew all too well.

Provoking Moscow, however, has been Washington’s poorly concealed specialty since the fall of the Berlin wall. NATO needed an enemy, you see, to justify its existence, and so did US defence contractors, to boost profits. So that now, NATO very dangerously surrounds and menaces a vast country that is armed to the teeth with nuclear weapons. NATO’s insane, potentially world-sacrificing aggression continued despite many loud protests from Moscow. As scholar Norman Finkelstein asked in a recent interview with Briahna Joy Gray — after exhausting all diplomatic avenues, what was Russia to do? This is not, in my perspective, to excuse the invasion in any way. It is an honest question. It needs to be raised — and answered — to cool the heated hysteria of the mephitic US disinformation war. Anyone with a scintilla of intelligence knows how the US would respond if the tables were turned. Washington would shoot its way out of such encirclement, and it would do so with nuclear missiles.

At any point in the Ukraine war, Biden could have urged negotiation instead of sanctions. He could have attempted — and efforts by the ruler of the US empire carry great heft, even with a client as understandably determined to defend itself as Kiev — to end this slaughter, this mashing of Ukraine into an abattoir. He chose not to. He chose prolonging the war over encouraging peace, thus condemning lots of Ukrainians, Russians and, if this war goes nuclear, billions of other people to death. He still chooses not to, even when it’s quite clear the long-planned economic sanctions have backfired and now crush western economies. (Those sanctions were ready, right out of the gate, and so had evidently been drawn up, quite malignantly, years before Moscow invaded.) Even when it’s clear that this economic, inflationary debacle ends Biden’s chances of re-election. If you sanction an economy as gigantic and globally vital as Russia’s, one that exports so many essential commodities, you are basically jumping off a cliff with your own country’s economy in your arms. Biden doesn’t seem to care, just like he doesn’t seem to care about the millions of people in the global south that his precious sanctions will starve.

They sure won’t starve fortress Russia. Moscow is doing fine. It has all the food it could want, a strong ruble, all the fertiliser it needs, Beijing has its back, and it can wait this siege out for years, while the Euro plunges in value and chumps like EU bigwigs Ursula Von Der Leyen and Charles Michel preside over Europe’s deindustrialisation. Does the US have second thoughts? Evidently not. Rather, as astute observers noted early on, the US, guided by meathead neocons, goaded Russia into invading in order to kill the Euro, deindustrialise Europe and sever trade between Moscow and the EU. Also, so it could balkanise Russia — well, that’s not happening; it’s the only piece of this dodgy scheme doomed to fail, due to Russia’s nuclear arsenal. And that’s only part of the story. Everything, everything, for the declining US empire is about saving face.

Which means the masses of Americans cretinised by corporate media war propaganda into a suicidally bellicose frenzy cannot be allowed to glimpse the possibility that Ukraine could lose this war. Even though by the time they inevitably do, inflation will have so thoroughly pummelled them that they won’t care. Already polls show a switch in public attention from Ukraine to soaring prices at the pump, in the supermarket and rising mortgage rates, despite corporate media’s idiotic efforts to keep the war front and centre in the public’s mind. Polls tell a different story. If Biden doesn’t figure this out fast, one can only hope he cedes his crown to a younger, wiser Dem candidate in 2024. Otherwise, he bequeaths us Trump or a Trump wannabe, an appalling scenario whose perils for the future of this so-called democracy and any hope to curb the climate catastrophe need no elaboration. But Biden just doesn’t seem to get it. It’s the economy, stupid.

Meanwhile, extreme heat-waves caused by oil-guzzling-induced climate collapse compelled the world’s number two wheat producer, India, to slash its exports. Heat damaged the harvest, and India needs that grain for its own 1.4 billion population. Millions in the poor countries that previously imported that food could starve. That means Russia’s wheat becomes all the more crucial. So does China’s — the world’s number one wheat producer. Moscow did open a humanitarian corridor 80 miles long and three miles wide in the Black Sea to enable the exit of ships from Ukrainian ports; the news that Kiev’s grain would pass safely through Black Sea ports controlled by Russia lowered global grain prices; and a maritime ‘grain corridor’ from Odessa, managed by Turkey and Russia for Ukrainian wheat was announced on June 6. Getting Kiev’s harvest to the global south, however, may be a moot point. That food, it seems, has been trucked and trained overland to Europe, possibly in exchange for weapons. So it remains to be seen if the latest exertion to direct wheat to the starving south bears fruit. But this isn’t enough. The west still dilly-dallies. Someone with an IQ needs to step in. That someone is UN secretary general Antonio Guterres.

Unlike imbecile western lemming leaders, the UN secretary general has a brain. He called out western sanctions in late May. ‘Russian food and fertilisers,’ he said, ‘must have unrestricted access to world markets without indirect impediments.’ That means no sanctions. The UN is saying that if we don’t want people to starve, some sanctions gotta go. Guterres insisted that ‘food and fertiliser produced by Russia and Belarus [must be reintegrated] into world markets — despite the war.’ Guterres made these remarks a few weeks ago, then repeated them on June 1. As the UN leader in constant touch with representatives from the global south, Guterres knows whereof he speaks.

So there you have it from the horse’s mouth: sanctions on Moscow’s wheat and fertiliser make food so expensive or so scarce that people starve. Lots of people. Is the US saving face worth that? To the troglodytes in the US congress and white house, the answer is probably yes. But luckily for the world’s poor, these ghouls have snared themselves in their own trap. American citizens, the population propagandised into hebetudinous stupidity, then treated by their rulers like dunces, the citizens of the supposedly exceptional, nonpareil, special, one and only, crumbling global empire, are looking at skyrocketing food and gas prices and they don’t like it. Their eyes are angrily riveted on that five-dollar-a gallon average cost of regular unleaded gas and their wildly enlarged grocery bills. They’re so sour about it that they may even throw the bums out in the next couple of elections. That spectre of electoral defeat, more than anything, could correct current barbarous US policy. Let us just hope it happens before multitudes starve. Famine is on his dark horse and he is galloping near.

CounterPunch.org, June 10. Eve Ottenberg is a novelist and journalist. Her latest book is Hope Deferred.