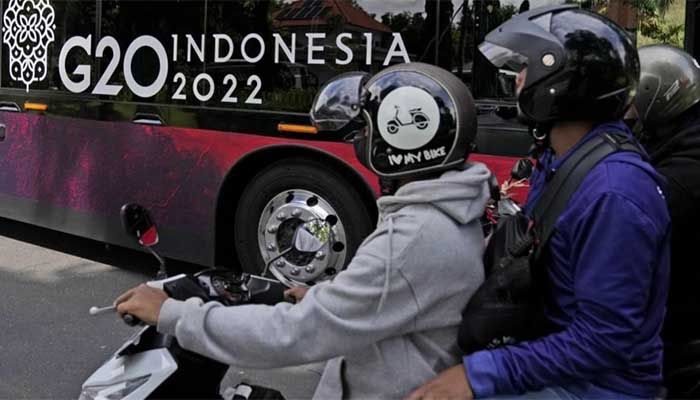 ﻿A showdown between Presidents Joe Biden and Vladimir Putin isn’t happening, but fallout from Russia’s invasion of Ukraine and growing tensions between China and the West will be at the fore when leaders of the world’s biggest economies gather in tropical Bali this week.

The Group of 20 members begin talks on the Indonesian resort island Tuesday under the hopeful theme of “recover together, recover stronger.” While Putin is staying away, Biden will meet with Chinese President Xi Jinping and get to know new British Prime Minister Rishi Sunak and Italy’s Giorgia Meloni.

The summit’s official priorities of health, sustainable energy and digital transformation are likely to be overshadowed by fears of a sputtering global economy and geopolitical tensions centered on the war in Ukraine.

The nearly 9-month-old conflict has disrupted trade in oil, natural gas and grain, and shifted much of the summit’s focus to food and energy security.

The U.S. and allies in Europe and Asia, meanwhile, increasingly are squaring off against a more assertive China, leaving emerging G-20 economies like India, Brazil and host Indonesia to walk a tightrope between bigger powers.

Indonesian President Joko Widodo has tried to bridge rifts within the G-20 over the war in Ukraine. Widodo, also known as Jokowi, became the first Asian leader since the invasion to visit both Russia and Ukraine in the summer.

He invited President Volodymyr Zelenskyy of Ukraine, not a G-20 member, to join the summit. Zelenskyy is expected to participate online.

“One of the priorities for Jokowi is to ease the tension of war and geopolitical risk,” said Bhima Yudhistira, director of the Center of Economic and Law Studies in Indonesia’s capital, Jakarta.

Last year’s G-20 summit in Rome was the first in-person gathering of members since the pandemic, though the leaders of Russia and China didn’t attend.

This year’s event is bracketed by the United Nations climate conference in Egypt and the Association of Southeast Asian Nations summit in Cambodia, which Biden and some other G-20 leaders are attending, and the Asia-Pacific Economic Cooperation meeting in Thailand right afterward.

The American president vowed to work with Southeast Asian nations on Saturday, saying “we’re going to build a better future that we all want to see” in a region where China is working to grow its influence. On Sunday, Biden huddled with the leaders of Japan and South Korea to discuss China and the threat from North Korea.

One question hanging over the Bali summit is whether Russia will agree to extend the U.N. Black Sea Grain Initiative, which is up for renewal Nov. 19.

The July deal allowed major global grain producer Ukraine to resume exports from ports that had been largely blocked for months because of the war. Russia briefly pulled out of the deal late last month only to rejoin it days later.

As leaders contend with conflicts and geopolitical tensions, they face the risk that efforts to tame inflation will extinguish post-pandemic recoveries or cause debilitating financial crises.

The war’s repercussions are being felt from the remotest villages of Asia and Africa to the most modern industries. It has amplified disruptions to energy supplies, shipping and food security, pushing prices sharply higher and complicating efforts to stabilize the world economy after the upheavals of the pandemic.

“My priority in Bali will be to speak up for countries in the Global South that have been battered by the COVID-19 pandemic and the climate emergency, and now face crises in food, energy and finance — exacerbated by the war in Ukraine and crushing debt,” Guterres said.

The International Monetary Fund is forecasting 2.7% global growth in 2023, while private sector economists’ estimates are as low as 1.5%, down from about 3% this year, the slowest growth since the oil crisis of the early 1980s.

China has remained somewhat insulated from soaring inflation, mainly because it is struggling to reverse an economic slump that is weighing on global growth.

The Chinese economy, the world’s second largest, grew at a 3.9% pace in the latest quarter. But economists say activity is slowing under the pressure of pandemic controls, a crackdown on technology companies and a downturn in the real estate sector.

Forecasters have cut estimates of China’s annual economic growth to as low as 3%. That would be less than half of last year’s 8.1% and the second lowest in decades.

Chinese President Xi will be coming to the summit emboldened by his appointment to an unusual third term as party chairman, making him China’s strongest leader in decades. It’s only his second foreign trip since early 2020, following a visit to Central Asia where he met Putin in September.

Biden and Xi will hold their first in-person meeting since Biden became president in January 2021 on the event’s sidelines Monday.

The U.S. is at odds with China over a host of issues, including human rights, technology and the future of the self-ruled island of Taiwan. The U.S. sees China as its biggest global competitor, and that rivalry is only likely to grow as Beijing seeks to expand its influence in the years to come.

The European Union is also reassessing its relationship with China as it seeks to reduce its trade dependency on the country.

Biden said he plans to talk with Xi about topics including Taiwan, trade policies and Beijing’s relationship with Russia.

“What I want to do ... is lay out what each of our red lines are,” Biden said last week.

Many developing economies are caught between fighting inflation and trying to nurse along recoveries from the pandemic. Host Indonesia’s economy grew at a 5.7% pace in the last quarter, one of the fastest among G-20 nations.

But growth among resource exporters like Indonesia is forecast to cool as falling prices for oil, coal and other commodities end windfalls from the past year’s price boom.

At a time when many countries are struggling to afford imports of oil, gas and food while also meeting debt repayments, pressure is building on those most vulnerable to climate change to double down on shifting to more sustainable energy supplies.

In Bali, the talks are also expected to focus on finding ways to hasten the transition away from coal and other fossil fuels.

Some observers of the bloc, like Josh Lipsky, senior director of the Atlantic Council’s GeoEconomics Center, question whether the G-20 can even function as geopolitical rifts grow.

“I’m skeptical that it can survive long-term in its current format,” he said in a briefing last week.

“This is not the G-20 they signed up for,” Lipsky said. “The last thing they wanted was to be in the middle of this geopolitical fight, this war in Europe, and be the crossroads of it. But that’s where they are.”