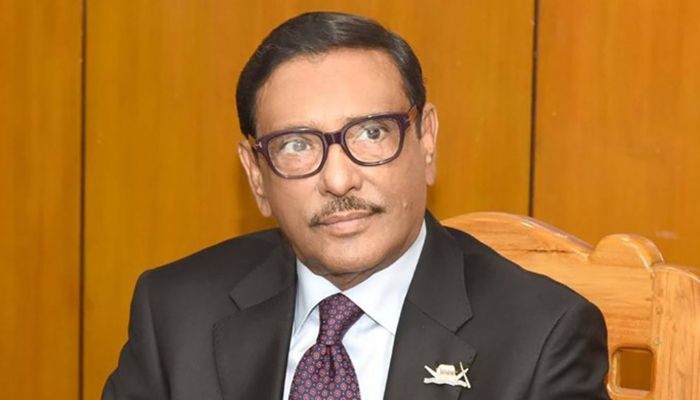 He came up with the remark at a press conference on contemporary issues at his official residence in the capital.

Quader, also the road transport and bridges minister, said after getting failed in elections and waging a movement, BNP is now blaming the government and the Election Commission (EC).

He said the EC is a constitutional body and it has been working independently.

Responding to a remark of BNP secretary general Mirza Fakhrul Islam Alamgir that the country’s electoral system has broken down, the AL general secretary said in fact the BNP, not the election system, has broken down.

''BNP joins elections to make the EC and the elections questionable. Realizing it, the country’s people have turned around their faces from BNP,'' he said.

Noting that nobody can break the BNP’s past records of vote-rigging, he said now the party is raising questions about the country’s electoral system.

About the Miraz Fakhrul’s allegation that conditional bail to journalist Rozina Islam was likely a ‘dictated’ court order, Quader said: “I want to know does he have any specific information to this end?”

He said by raising such an imaginary allegation, BNP is not only making itself questionable but also is undermining the country’s independent judiciary.

The BNP was deliberately making falsehood against the government but now it is criticizing the judiciary, which is equivalent to contempt of court, the AL general secretary said.

About Mirza Fakhrul’s allegations over passport and foreign policy issues, he said: “It is unclear why he (Fakhrul) is voicing such allegations. There could be an intrigue behind his statements”.

Quader said a passport is a travel document and identity, nothing else, and it has no relation with world geopolitics. Now, e-passport is acceptable around the world, he added.