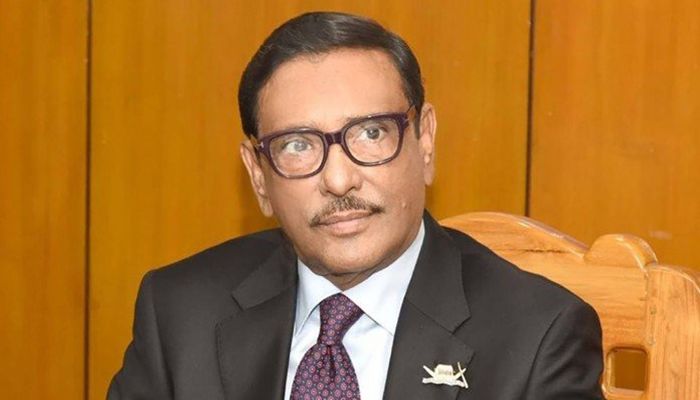 Awami League General Secretary Obaidul Quader today said if the BNP chooses the path of terrorism and destructive acts again in the name of the movement, it will be resisted with an iron hand, involving commoners of the country, reports BSS.

"The fascist BNP has been rejected time and again by the pro-democracy people of this country and it has faced dire consequences," he said in a statement.

Quader, also the road transport and bridges minister, said: "We want to say clearly that if the BNP again chooses the path of terrorism and destructive works in the name of emerging as a strong opposition party and movement, a strong resistance involving the country's people will be built against the party."

BNP secretary general Mirza Fakhrul Islam Alamgir has announced the BNP will emerge as a strong opposition party in a very short time, he said.

The AL general secretary said the BNP's powerlessness, weakness, incompetence and misery have been exposed again through this announcement.

Ultimately, the BNP secretary general has admitted that the BNP is practically a powerless and incompatible political party, he added.

At the same time, what Prime Minister Sheikh Hasina has said about the absence of a strong opposition is evident in the statements of Fakhrul, Quader said.

He said according to the norms of parliamentary democracy, the national parliament is the place to establish the strength of the opposition and that is why the opposition is called the shadow government.

So, the road transport and bridges minister said, any political party must ensure the required number of seats in parliament to establish itself as a strong opposition party.

"If I ask the BNP leaders - what is their current number of seats in Jatiya Sangsad? And with that, it is proved before the nation how strong they are as the opposition party," he said.

Quader said without joining the next elections, it will not be possible for the BNP to become a strong opposition party in parliament.

"But is the BNP hinting at displaying malicious and cowardly power like arson terrorism through destructive and terrorist acts?" he questioned.

He said the conscious people of the country think that there is a deep anti-national conspiracy behind the announcement of the BNP.

The AL general secretary said the BNP was born in womb of fascism but Fakhrul termed the government a fascist one.

Noting that BNP never practices politics for the people's welfare, he said the only goal of BNP is to seize power in any way.

Quader said the BNP leaders have repeatedly used this fascinating words to hide the inferior history of their dictatorship and fascist ideology and make people confused.

To sustain the interest of its corrupt and terrorist leadership, the BNP brings the public interest as a shield, he said, adding "In fact, the BNP is fascist in heart and democratic in words".