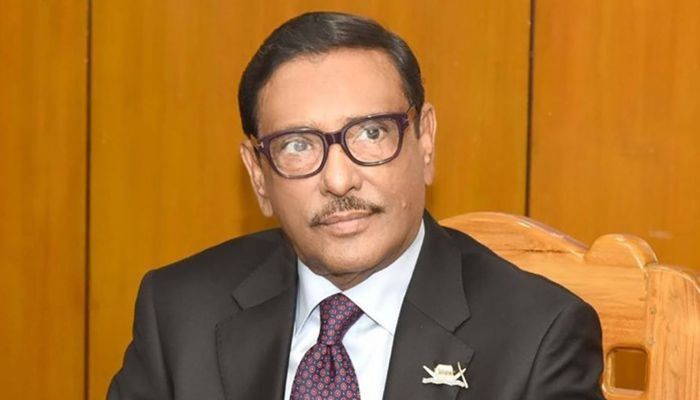 Road Transport and Bridges Minister Obaidul Quader on Monday said an identified group is carrying out propaganda and spreading confusion purposefully saying that the electricity and energy crisis will prolong in the country, reports UNB.

He urged the people not to be misled by the motivated propaganda which are being carried out by those who want to see failures of the country, not its development and who are patrons of communal ill-forces.

The minister made the call while briefing reporters at his ministry’s office, said a PID handout.

He said the world's energy supply chain has become unstable due to the Russia-Ukraine war during the global economic recovery from coronavirus pandemic, which led to an abnormal rise in fuel prices in the international market.

Quader, also the general secretary of Bangladesh Awami League, said more than 90 per cent of the countries across the world depend on imports for primary energy. As an energy importer, this situation has had a negative impact on

Bangladesh as well, he said.

Now almost all countries of the world including Europe and America are facing the energy crisis and they have drastically reduced the consumption of electricity and fuel in a bid to tackle the situation, he said.

The minister said the government of Bangladesh has taken various preemptive measures to face the negative impacts caused by the Russia-Ukraine war, resultant economic sanctions, as well as price hike of fuel, gas and fertilizers in the international market.

He said the high inflation rate in the developed world indicates the severity of the global economic crisis.

But the inflation rate was 7.56pc in Bangladesh in June, said the minister, adding that many quarters are trying to mislead people by talking about only Bangladesh inflation.

“In Bangladesh, the situation remains relatively tolerable due to the precautionary measures taken by the Sheikh Hasina’s government,” he added.