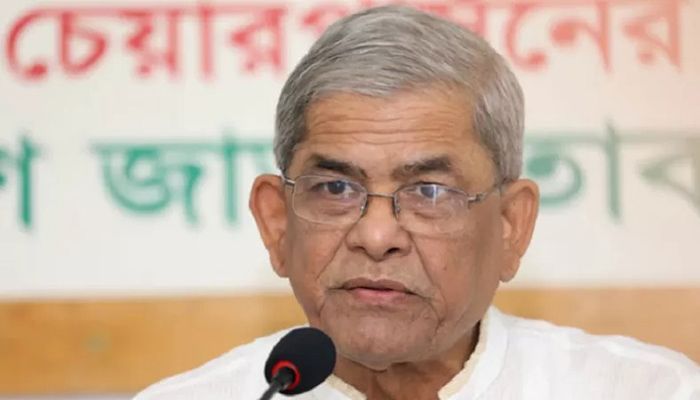 ﻿Voicing deep concern over the firing of mortar shells by the Myanmar Army inside Bangladesh, BNP on Saturday urged the UN and the international community to take steps to stop such insolent activities and violation of international law.

“We would like to draw the attention of the United Nations and the international community to take necessary measures to prevent such audacity of Myanmar," said BNP Secretary General Mirza Fakhrul Islam Alamgir.

Speaking at an emergency meeting at BNP’s Nayapaltan central office, he also called upon the Awami League government to take appropriate measures boldly to protect the territorial integrity of independent and sovereign Bangladesh."

The BNP leader said an alarming situation has been prevailing along the Bangladesh-Myanmar border areas due to repeated incidents of firing mortar shells into Bangladesh territory by the Myanmar Armed Forces.

He said the military aggression of the Myanmar Armed Forces, which started on August 28, has been increasing due to the weak and subservient diplomacy of the current ‘illegitimate’ government of Bangladesh.

“In the latest incident, a Rohingya teenager who was hit by a mortar shell fired by the Myanmar forces died yesterday (Friday) on the zero-line opposite to the Ghumdhum border in Naikhongchhari Upazila of Bandarban. Five more kids were injured in the incident,” Fakhrul said.

A week after firing mortar shells along the Bangladesh border, he said the Myanmar forces repeatedly violated the airspace and fired mortar shells from warplanes and helicopters.

“The mortar shells exploded within 120 meters of Bangladesh territory near the zero-line of Naikhongchhari border in Bandarban, which is a direct violation of international law. The Myanmar forces are often firing toward Bangladesh violating the airspace. BNP strongly condemns and protests the killing of people by firing mortar shells by the Myanmar Army along the Bangladesh-Myanmar border and the violation of international law,” the BNP leader said.

He also said Myanmar is showing such audacity by firing mortar shells inside Bangladesh only because of the government’s knee-jerk foreign policy.