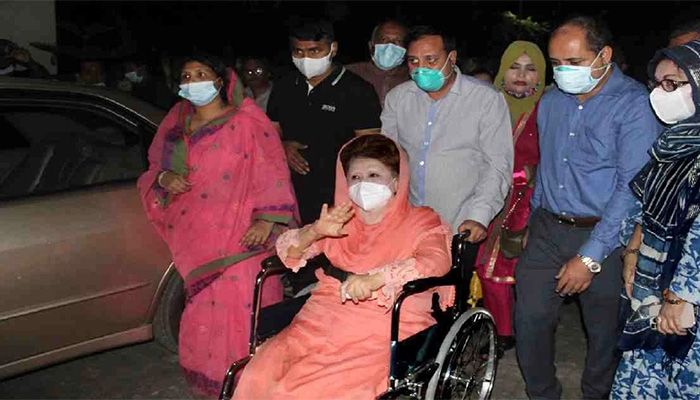 Law Minister Anisul Huq told the media: “The security services division under the Home Ministry will issue a gazette notification in this regard.”

Khaleda Zia will receive treatment from home and she will not be allowed to go abroad during this period, he said.

Recently Khaleda’s family filed a petition before the Home Ministry seeking her unconditional release. They also sought permission from the Home Minister to allow Khaleda to go abroad for her treatment.

Amid the coronavirus outbreak, the government suspended Khaleda’s jail term for six months through an executive order on March 25, 2020.

The government extended her conditional release in the two corruption cases several times.

The former prime minister was sent to Old Dhaka Central Jail after she was sentenced to five years’ imprisonment by a special court in the Zia Orphanage Trust corruption case on February 8, 2018.

She was convicted in a second corruption case later.

The 76-year-old BNP chief has been staying at her Gulshan residence since her release. A special team of her personal physicians has been overseeing her treatment._UNB