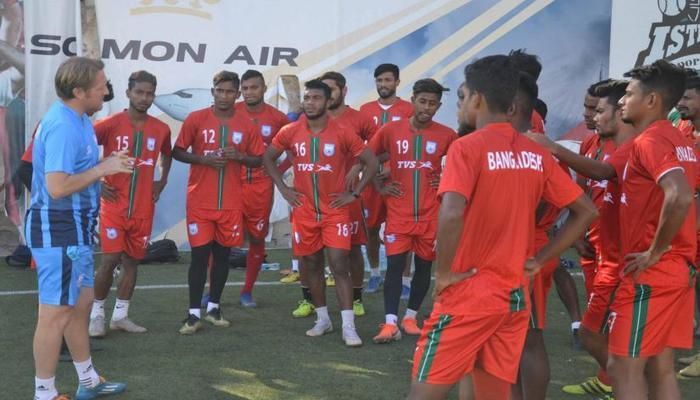 Bangladesh will take on Afghanistan in Tajikistan to start their joint Qualification (Round-1) of the FIFA World Cup-2022 and AFC Asian Cup 2023 campaign.

Ahead of the first leg Bangladesh head coach James Day with an interview said his boys are trained well and he is very pleased with their performance in the friendly games. It is going to be a very tough match against a good team but they are looking forward to winning the match, he said.

Commenting about Afghanistan’s 6-0 lose against Qatar, the Bangladesh head coach said Afghans are good team ….they played as an excellent side in Qatar, who are preparing to host the FIFA World Cup. I don’t believe it will down their morale following their previous game defeat.

In 2015, Bangladesh lost 4-0 to Afghanistan but they had also defeated Afghanistan 4-1 in 1979 while four other games ended in draws, however, the coach said the past record would not influence Tuesday’s match.

“Well, I think it shows that it’s going to be tough for Bangladesh as we have not beaten them since 1979. So if we are able to get a positive result against them, then it will be a fantastic achievement,” BSS quoted James.

The English born Bangladesh head coach said: “I think it’s a slight advantage for the home team but we have trained and played on Astro this week so we have given ourselves the best chance of getting used to the surface.”

Bangladesh have been put in the Group E along with Qatar, Oman, neighbouring India and Afghanistan.

Bangladesh (182) are the lowest-ranked side in the group while Afghanistan are ranked 149th. Qatar are the highest-ranked side at 62nd followed by Oman (87) and India (103).